I think sea slugs are cool.

So are sea urchins. 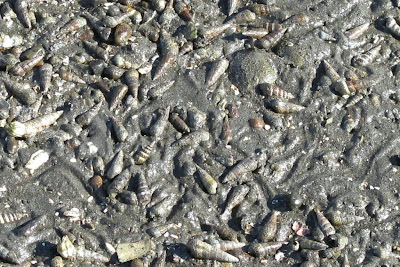 Sea snails, Crescent Beach
Although I haven't seen a sea cucumber since I was a kid. They used to hang out under our dock, and once we fished one out and watched the water pour out of it until it hung limp and slimy from my hands. I threw it back in, then. Weird, and wonderful.

I need to make this clarification, because I have been sadly misunderstood.

This morning, Jim Lemire posted the latest edition of Circus of the Spineless, including a link to my recent post, "Do beetles get hangovers?" It's a great edition, with plenty of goodies for all invertebrate lovers. (Should I say, rather, "lovers of invertebrates"?) But he took as a theme the current feud raging among the ScienceBloggers, over the question, "Which are better, echinoderms or molluscs?"

Craig, on Deep Sea News, lists the reasons for his choice (molluscs), beginning with this, the most important;

...the deuterstomes are basically a superphylum that encompasses the echinderms, urochordata, chordata, and hemichordata. What do these groups share in common? First, they are extremely uncool and to cheer for them makes you uncool.

Now Jim is pro-echinoderm. And anti-mollusc, in consequence. And he focussed the Circus of the Spineless accordingly.

Now, here comes where I got involved. The call went out for submissions to CotS; I sent mine in. And it got caught in Jim's spam filter. He sent out a second call, notifying us of the quirks of the filter, and orienting us as to his (a preference for echinoderms, a reluctance to accept mollusc posts), as well.

I sent in my submission again, but this time, thinking that maybe the spam filter has absorbed some of Jim's ideas, added a thankful, "Not a mollusc, fortunately."

And Jim, blinded, perhaps, by his rabid dislike of the "enemy", has jumped to the conclusion that I share it. He is mistaken. I am sitting solidly on the fence.

That said, I think the Cnidaria are cooler still. So there! 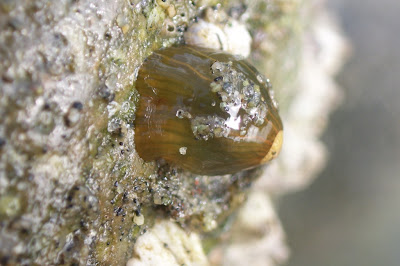 Email ThisBlogThis!Share to TwitterShare to FacebookShare to Pinterest
Labels: circus of the spineless, intertidal zone, invertebrates