A dropping of pigeons

No, not pigeon droppings; a "dropping" is one of the terms for a flock of pigeons. * 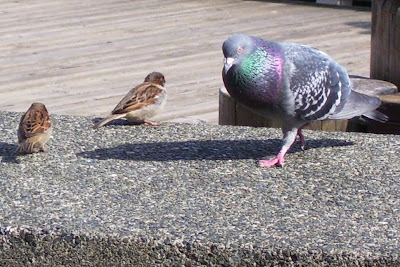 Pigeon # 1 Basic rock dove, but with no white on back. 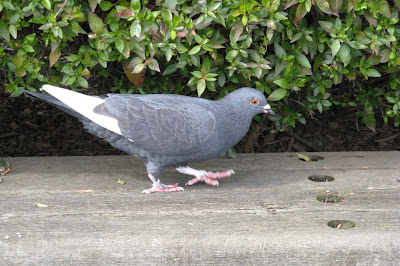 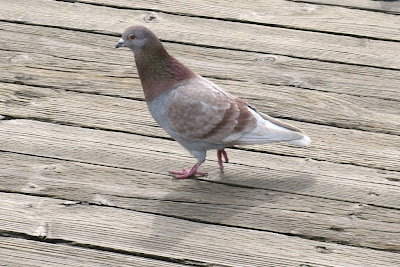 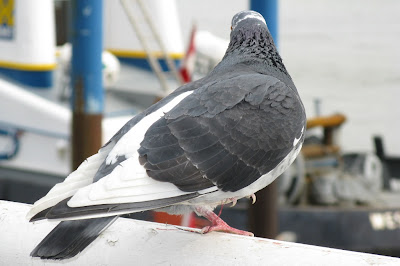 Pigeon # 4** Charcoal and white, with a speckled cap and white head band. No wing bands.
All of these pigeons are regular diners around the outside tables at the New Westminster Quay food fair. Only the first one is in any way close to the "book" description of the Columba livia, the rock dove, even though they all are related. Compare them to this, from Wikipedia: the rock dove has

a dark bluish-gray head, neck, and chest with glossy yellowish, greenish, and reddish-purple iridescence along its neck and wing feathers. The iris is orange, red or golden with a paler inner ring, and the bare skin round the eye is bluish-grey. The bill is grey-black with a conspicuous off-white cere, and the feet are purplish-red.
...
The white lower back of the pure Rock Pigeon is its best identification character, the two black bars on its pale grey wings are also distinctive. The tail has a black band on the end and the outer web of the tail feathers are margined with white.

Domestic pigeons were bred from the rock doves, then bred into different varieties; carrier pigeons and racing pigeons, for example. Many of these later returned to the wild, interbreeding with the wild variety, and giving rise to our city pigeons. For some reason, maybe in part because of the lack of constraint, on one hand by human breeders, and on the other by the limitations of living "off the land", they have been able to develop a great variety of size, shape and colour.

One of the pigeons that congregate for the dawn ceremony above our parking lot gleams a deep red in the afternoon light; the rest are varied shades and patterns of grey and white. The New West pigeons wear anything from black and white formal dress to quiet grey suits to mottled camouflage gear to psychedelic iridescences.

In the city, with food and warmth available year-round, these pigeons breed continuously, like the humans they associate with. A couple of the males in this "dropping" were strutting their stuff this week, courting females very unlike themselves; more variants coming up!

**Pigeon #4 has a wire tangled around one foot. He was limping. I hope he manages to work it off.
.
Posted by Susannah Anderson at 1:53 am