Do beetles get hangovers?

David Brady, over at Insect Picture of the Day has recently been looking at a carpet beetle, (here and here) and we've been wondering about the mouthparts.

I was (am still) interested in getting a clear picture of the face, so I've been searching for a new, live beetle. Dead ones don't work; they curl their faces inwards when they retract their legs; I can't even see the eyes.

If I have an infestation, it's not much of one. I even vaccuumed and went through the dust bag looking for a beetle, with no luck. But they may be coming in from outside; at least, I found a pair finally, by the back door.

They weren't a very cooperative couple; they seemed more interested in trundling around than in having their photo taken. When I put them on ice, they immediately, before I could even grab the camera again, retracted legs and face into slots and played dead.

Yesterday, with only one left alive (they don't do well under the heat of the lamp), I tried slowing him down with a drop of water. It worked, for a couple of minutes. 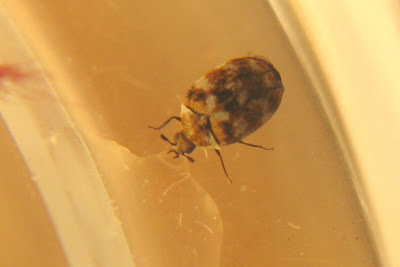 Ahhhh! I was so thirsty!
But as soon as he'd drunk his fill, he went to roaming around with renewed energy.

I gave him a few sugar crystals; he liked those. 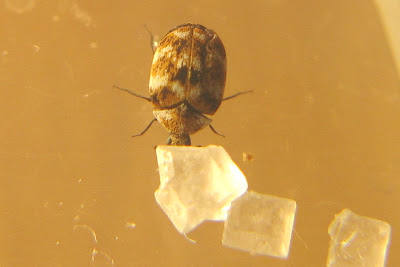 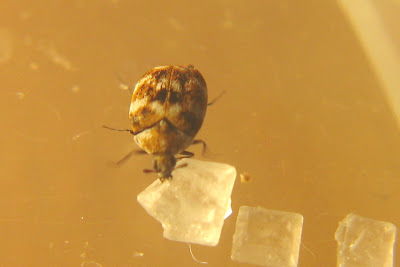 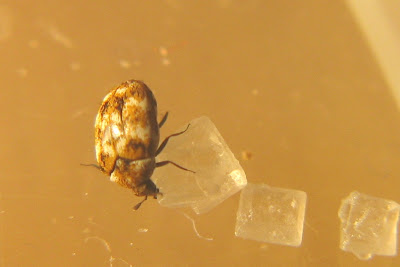 Chomp, chomp, chomp. Lick, lick, lick. I like this! 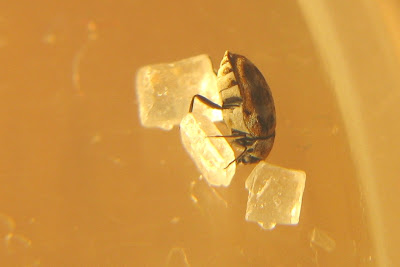 This one's good, too.
I could see, under the lens, his little mouthparts working away. When I shook the lid he was in (by mistake) and the crystals rolled, he went with one, clutching it tightly, and went back to his feeding as soon as they landed. 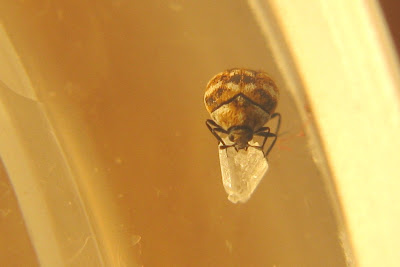 Mine! All mine!
Now, the morning after, he's very lethargic. I think he overindulged.
.
Posted by Susannah Anderson at 9:54 am