But nary a cougar

Cougar Creek is a small creek. It trickles gently from culverts under the housing developments behind our vacant lot, meanders around and under the malls that replace the marsh and lake that once was here, joining forces finally in the gap between school grounds, housing developments and the Sikh temple. From there, the combined waters go back into a culvert, emerging at the head of the steep Cougar Canyon, where it "goes wild", allowing for an annual salmon fry release, and good cover for animals. (Two summers ago, we startled an owl sleeping on a branch barely over our heads down there.) At the bottom, it slows again and oozes into Burns Bog. Even in the rainy seasons, it is barely ankle deep, except in the ravine.

At the meeting place of the headwaters, now Cougar Creek Park, a man-made pond collects stormwaters, and a 2005 Releafing project added native trees and shrubbery.

A variety of local organizations has been involved in this work: Cougar Creek Streamkeepers, Rai Medical Building Streamside Restoration Project, Cougar Canyon Elementary School, Fisheries and Oceans Canada, and others.

From "About Cougar Creek":

Lifeform species documented as being observed within the Cougar Creek drainage system are:

And they forgot the birds. For shame!

We dropped in to the park again on Wednesday afternoon. And found another construction project well underway. This one is planned and carried out by non-human developers. 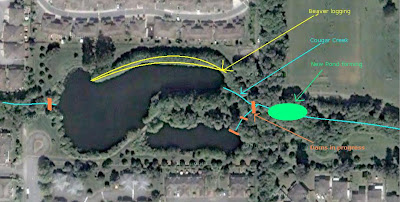 We had noticed, last fall, beaver activity on the creek; chewed-off trees and a dam started at the lower outlet. It has been going on apace since then. Along one side, about 1/3 of the small trees have been cut. The outlet dam is still in place, and three smaller ones are set up at the inlet to the pond. The shallow creek bed beyond is deeper and much wider, making a new, shallow pond, ideal for mallards and other up-ending ducks.

The water level in the main pond is up. Many of the trees planted on the north bank now have their feet in the water.

And the ponds have attracted a new visitor, hopefully frequent (I'm hoping there are enough fish for him): 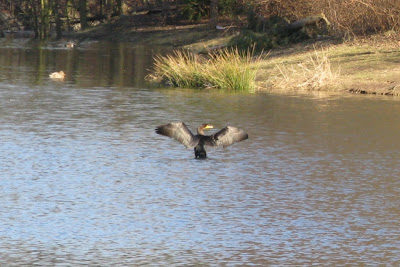 A cormorant, probably the Double-Crested, Phalacrocorax auritus. Even at a distance, the cormorants can be recognized by their habit of stretching out the wings to dry them, as this one is doing, since their feathers are not water-proofed, like those of other seabirds.

This one is perched on a half-submerged plank or tree trunk in the centre; when he took a break to swim around, it floated.

He had company; the pond was full of waterfowl. 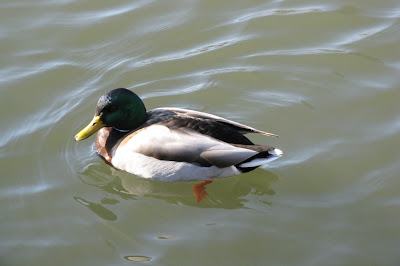 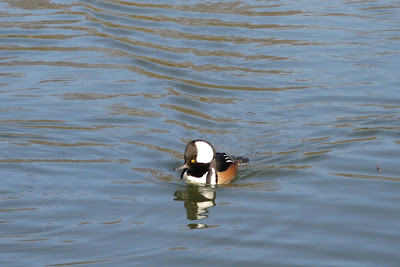 The male, dressed to kill. 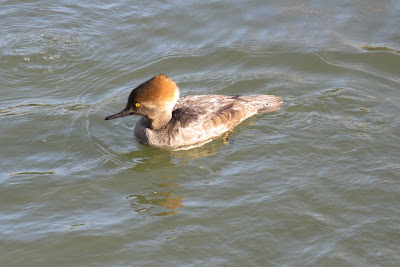 The female. Upswept hairdo.
I had a bit of bird seed in the car; when Laurie stopped at the bridge to change film, I ran back and got it to throw off the bridge and attract the ducks. Of course, the mallards mobbed us, fighting and splashing all the while; it's mating season, and the males are "tetchy".

These little hooded mergansers were much more placid, and so beautiful; I wanted to get a good photo from close up, but every time I aimed the camera at one, it dove for seed at the bottom. I came home with lots of photos of disturbed water.

But among them there was this one: 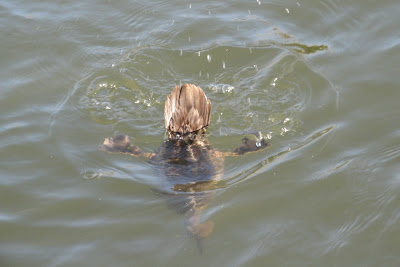 A female hooded merganser, diving. See how the legs stick straight out from the body, paddle feet extended for power? 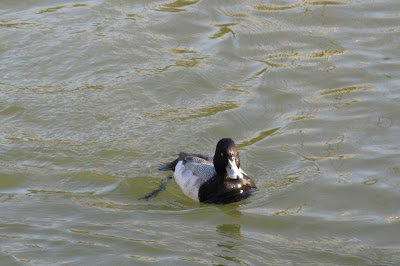 Lesser scaup, male. I didn't see a female. The lesser scaup can be distinguished from the greater by the colour of the head; it has a bluish or purplish sheen rather than green.

Assorted mallards and wigeons. And I'm not sure of that middle female; she looks like a gadwall, with those fat cheeks and white patch. 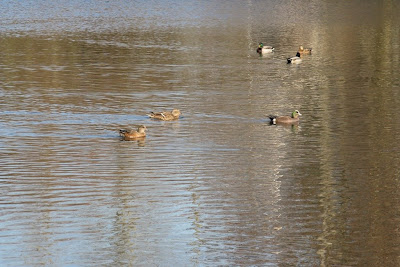 And the resident heron, in the same spot that we found him last visit. 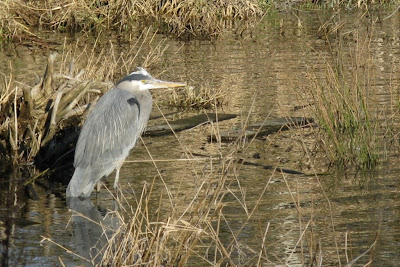 We didn't see a beaver, though. And I forgot to look for scat. Next time.
Posted by Susannah Anderson at 2:28 am