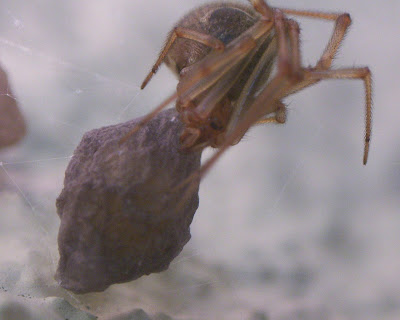 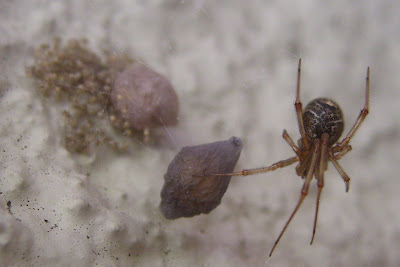 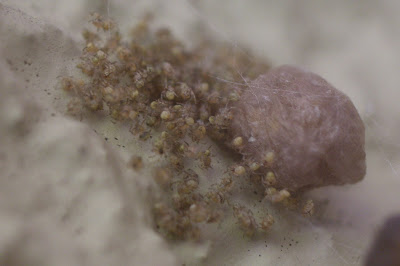 Spiderlings! Aren't they cute?
I've been checking these eggs morning and evening. They first appeared Monday morning, the 20th. Which makes the incubation period, from July 26th to yesterday, 25 days. That question answered.

And she has laid a second batch of eggs, so I'll be looking for those babes the middle of September.

Next questions: 1. how many of those spiderlings will survive? 2. And how long will they sit around their old case before they move out? (I just checked with a flashlight; they are still clumped in the same spot.)

About the males: back in July, a small male hung around the web for a week or two. Then he disappeared, about the time she laid those eggs. I wondered if he had been eaten. Last week, there was another, a bit smaller; after a few days he had competition, a second tiny male. I kept an eye on them and watched one make advances up to within an inch or so away, but then he retreated to the edge of her web again. Yesterday, there was no sign of either male.

Question # 3: Does she eat the males as soon as they dare to breed with her? Or when she's ready to lay eggs?

Around the corner, Chica has laid her own eggs, the same day. Hmmm... 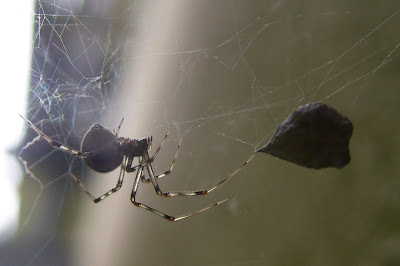 Chica. I love this photo, against the light.

Next: Baby Pictures
Posted by Susannah Anderson at 1:36 am