(I continue reporting, back to front; I'm waiting for photos from Laurie's film camera for the first segment.)

The delta is flat land. Centuries of slow silting from meandering rivers, the Nicomekl and the Serpentine, have built fertile farm land and then continued with great underwater flats. It almost looks as if we could walk across from Boundary Bay to Mud Bay. At low tide, of course. Providing it stays put and doesn't come roaring back at us. 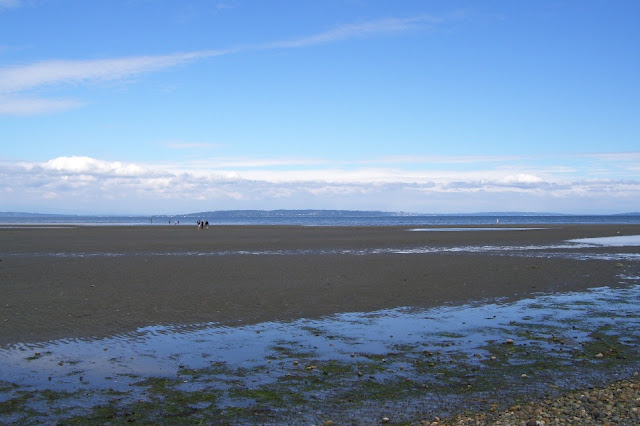 That's the high ground in Delta, where we live, over on the far side.
We crossed a foot-wide rivulet, and headed south and east. The sand is clean here, with few snails, as yet, a few patches of eelgrass, some sea lettuce. The occasional purplish clam shell lies open on the sand, remains of a seagull's lunch.

Something was odd about it, though; we're used to wave-like ripples of sand, the ones we find at White Rock or Crescent Beach. The sand here was rolling, more like a plowed field than a sandy beach. 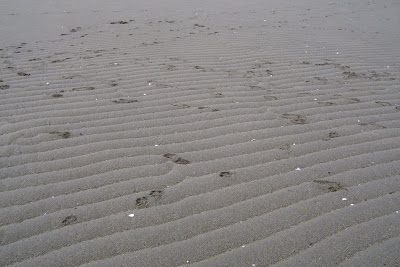 A family had left their sandals behind and gone out to the edge of the water barefoot. Or maybe that was where the edge had been when they decided to go wading. It sure wasn't there now. 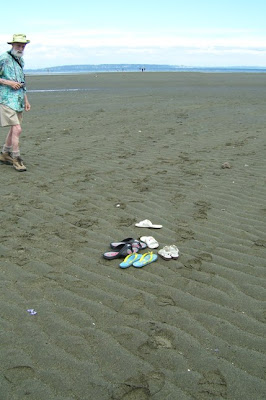 I think that's them in the distance.
We walked to the water's edge, saw nothing but more sand and more water, and turned back. The tide was starting to trickle up the furrows.

We came to a little depression, where warm water stood a couple of inches deep. While Laurie took sky photos, I looked for snails. And found these: 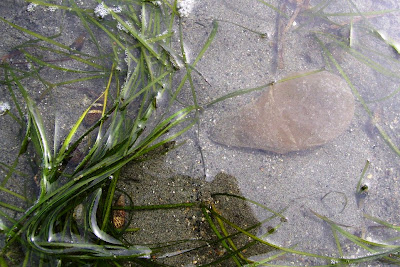 See that pale brown thing? It looks like a big serving spoonful of gelatin that has been rolled in the mud; at first, I thought they were jellyfish and nudged one with my toe. (I don't touch jellyfish with fingers; one never knows if they sting.) It seemed to be connected to the sand, so I rolled up a tissue and pushed at it and several others. They were easily moved around, even rolled up with the wet paper, but were firmly anchored to the sand at one end. Looking around, I could see several dozen in that stretch of water, from 2 to 4 inches long.

I took photos: Laurie came over and took a couple himself. Then we turned to head back to shore.
Oops! No longer possible. Between us and the shore was a broad stream, about ankle-deep. Fine for me, with my old sandals, but not for properly suede-booted Laurie. We backtracked. Fast. And faster. Too late; we were encircled. 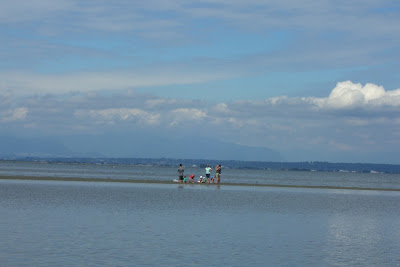 Another party that is going to have to hurry.
Laurie started to take his boots off. After the first one, he had to back up; the water was nibbling at his toes.

We waded, through fast-running water. On the shore, we found a good rock close to the edge for Laurie to sit and put his boots back on; those shore-line rocks were sharp! He got one foot dry and the boot on, and the water had surrounded his rock. Off we went again, "Ow! Ow!" He dropped a sock in the water in his hurry.

While Laurie sat on a dry log and finally worked on that second boot, I looked back. The beach was gone; a scant two meters of damp rock remained to be covered. 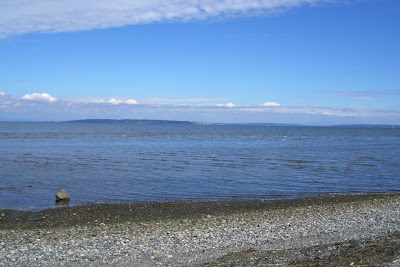 Water, water, everywhere.
Back at home, I've been searching, through my books and on the web, for an explanation of those "jellies". Eugene Kozloff, in Seashore Life of Puget Sound, the Strait of Georgia, and the San Juan Archipelago, (and that's an unwieldy title for a book if there ever was one) gave me a clue: a sea slug, Melanochlamys diomedea, lays her eggs in an egg case just like that. Jelly, attached to the substrate at one end by a longish anchor thread.

The only problem is that diomedea's egg masses are less than an inch long. These were 3 and 4 times that.

And I've not been able to find anything else that matches. I have written an expert on sea slugs; hopefully, he'll be able to set me straight.

And I'm wondering; did those people ever find their sandals in time? Or are they going to be washed up on some Vancouver Island beach?