I am far too easily distracted...

Three sunny days in a row! Time to start organizing the garden and patio. I had the afternoon free, so I got to it. Washed windows, wiped down patio table and chairs, scrubbed out the bird bath, admired my sprouting perennials. And took down the bird house that had been turned topsy-turvy when it snowed those 18 inches in one day. I brought it in to be repaired and re-hung.

That was as far as I got. On the edge of the birdhouse roof, I noticed a sprinking of tiny black dots raised above the surface on millimetre-tall stalks. Slime mold!

Out came the camera and magnifying glass. And here they are: 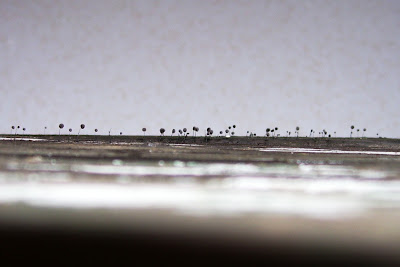 Click on this one to see them close-up. Aren't they beautiful? 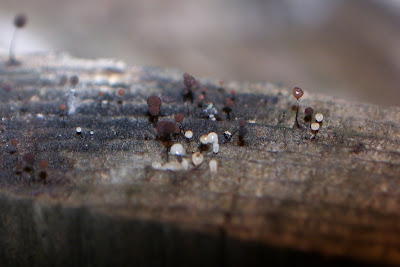 These are cellular slimes, but I couldn't identify them confidently. They look more or less like Comatricha to me; what species, I can't tell. Or alternately, they could be Japanese lantern slime, Dictydium.

Slimes are among the strangest creatures I have seen. Neither animal nor vegetable; one moment acting like independent amoebae, then the next organizing themselves into one organism and growing like a mushroom. In recent years, scientists have moved them into a separate kingdom, Protista, which they share with other tiny nucleated organisms like amoeba and algae.

They start off life from a spore, and grow as separate amoeba-like animals, eating bacteria, etc. At some time, they start to clump, then "migrate" as a single organism to an appropriate location, where they grow like a plant, some becoming stem cells, other spore cases (sporangia) or spores. One type, at a certain stage, loses its individual cell walls and becomes a mass of flowing naked protoplasm, hence "slime".

Others become masses of jelly; I have come across blobs of transparent "orange marmalade" in the dry bush near Chase, in the BC interior. Around here, I find bright yellow blobs, somewhat smaller. Or what looks like brilliant orange, red or yellow insect egs stuck to rotting sticks under the evergreens, or masses of scrambled eggs. Once, in a hollow stump, we found a white mass about the size and consistency of boiled cauliflower. In the process of migrating, some look like a tangle of threads, or pretzels. You name it; slime mold will imitate it.

And then there's the "dog vomit" slime. Yes, that is its name. And you can guess what it looks like. That one, I haven't seen yet. Just as well.

Here are a few links with fascinating photographs: Photo Gallery of Mycometes, Fungal Biology, George Barron (U. of Guelph), Hidden Forest, and a blog entry from Sitka Nature.

The bird house? I eventually got back to it, and replaced its floor. But I'll have to hang it up tomorrow. If it's not raining again.

I liked this photo; the silhouettes of slime fruiting bodies in a misty, moody atmosphere. Posted by Susannah Anderson at 11:33 pm