Of boom boats and donkey engines

On a hot summer's day in Powell River, there is no better place to be than in the forest and near the shore. For example, on the Willingdon Beach trail.

The trail used to be part of a railway that hauled logs to the mill at the north end of town. This track was in operation only from 1910 to 1918; afterwards, the rails were removed and the trail was used by mill workers living to the south, in Westview. Now it has become a popular easy walk for local residents, with shade, access to beaches along the way, interpretive sign, native artifacts among the trees, and old logging equipment rusting quietly in the shade.
I had to stop and examine each of these machines. They brought back vivid memories. I grew up, so long ago, on the west coast of Vancouver Island, seeing the loggers working up and down the hillsides along the shore; I remember the chugging of the donkey engine, the clatter as a log danced down the hill, the shouts of the fallers ("Timberrrrrrr!"), the rumble of loads of logs tumbling into the water to be hauled away in big booms. So different, these days, with the operations on mountainsides far away, the hills shaved down to the dirt, the logs (so much smaller these days - mere toothpicks!) picked up in mouthfuls by big-toothed monsters.
These little round iron tugs push and pull around logs many times their size, maneuvering them into position in the booms, wallowing around half swamped, it seems, with the water washing over the decks . Laurie wondered how they floated; they look too heavy, but they enclose a lot of air in the deep hull. I found a video showing one at work. Fun to watch!

On our west coast mountains, in the absence of machines that could carry logs, they were attached to steel cables, dragged into an upright position, and winched down the mountainside. The winches also dragged machinery into position.


Every operation had a donkey engine, in those days. It was a steam boiler on a sled, powering the winch which it used to drag itself up the mountainside. There, its cables were attached to the top of a spar tree, the tallest, sturdiest tree on the site. The cables ran down the hill to the dumping wharf. Harvested logs dangled from the high cable as they made their way down to the water.

Logging was a labour-intensive industry then; the slopes swarmed with men, cutting, trimming, and fastening logs, clearing brush, tending the few machines. Wood, even though we were surrounded by it, was still costly, in terms of man-hours. But our houses were smaller, lumber was recycled; none was wasted.

Two of the signs near the donkey engine were interesting: 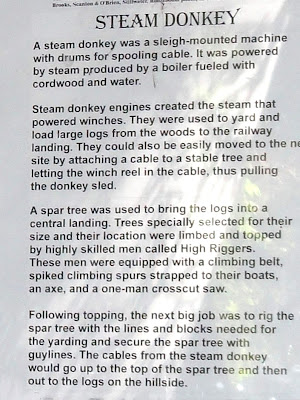 Thanks, Margy, for the suggestion. I loved this trail!

Posted by Susannah Anderson at 2:30 am