I once had a sparrow alight upon my shoulder for a moment, while I was hoeing in a village garden, and I felt that I was more distinguished by that circumstance that I should have been by any epaulet I could have worn.  ~Henry David Thoreau

"I and the Bird." It's a very personal thing, a face-to-face conversation, one on one. Can you imagine "I and the Wasp"? Or "I and the Worm"? (Well, maybe you can. A few of us are ... odd.) We have Carnivals of this and Circuses of that. But it has to be "I and the Bird", even when we're birding in groups. When you look a bird in the eye, it's you and him. Or her.

I remember, when I was a very small first-grader, how a hummingbird somehow got into our house. Mom chased him from corner to corner, from the kitchen to the living room and back, until finally he cowered, trembling, in a spot where she could toss a dishtowel over him. She held him gently in her hand until he recovered. I remember him there, so tiny, so fluttery, so afraid. After he'd calmed down, we took him outside, wrapped in the cloth until we had checked to be sure the cat wasn't watching. Then Mom released him and he flew away.

That was long, long ago. And this morning I put out sunflower seeds for the chickadees, small bird seed for the juncos (although they like a nibble of sunflower seed, too).  The chickadees scold me when I take too long, or when their birdbath is empty. "Dee, dee, dee!" "Where's our breakfast?"

A lifetime of birding. I haven't made lists. I didn't try to identify species and life stages until relatively recently; I didn't have the right books and internet sources. I don't carry a lot of equipment. I'm not even too handy with binoculars. But I've watched and laughed, shared lunches, listened, talked to them, felt their joy. Canada goose, eating eelgrass. White Rock beach.
That's me. Every birder meets the birds in their own way. For Gunnar, it's a Zen thing; "The closeness to nature, the contemplation of being one with nature, the ability to put a name to every living thing you see, the envy of flying ability, etc..."  Vickie finds "... unexpected treasured moments with nature" watching Long-billed Curlews at Matador Beach. Joan takes evocative photos of Great Blue Herons on the Move.

Now that it's so easy to call up a zillion good photos on the web, or Google an expert or a specialized web site, or order a book, some of us try to ID the birds, map them, guess their age. Here's Amber, making careful lists as she works out a Sparrow ID.  On the mudflats in Panama, Jan is naming "peeps": Tight together by the tide. "Even with close and careful observations, many sandpipers will be left unidentified," he writes.  Rick finds he hasn't been thorough enough: No Problem? No Problem! "And there must be more subtle birds." Or maybe someone else could do some research and write it up? He wants to know about the Pied American Wigeon. 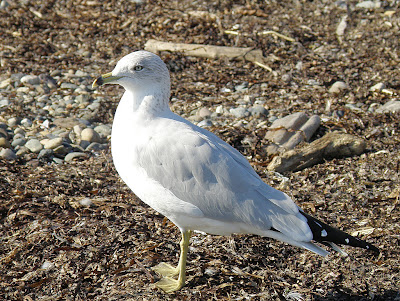 Adult ring-billed gull. Yellow bill, eyes, feet. White Rock.
More wigeons. Autumn Feathers - Eurasian Wigeon, from Birding is Fun!. Agreed. Especially when Robert is Faked Out!  "I just knew I'd find loads of birds over on the other side of the park where all that bird noise was coming from." Ha!

More fun, from Tai Haku. Camouflage: FAIL! "Hey. I never said they were smart." But, "There's a wildness about these sorts of birds I rather like."

"... magnificent ... truly powerful and awe inducing". That's how Clare, in Nunavut ('way up there, across from Greenland) describes the gyrfalcon, or Kiggavik, as it is called in Inuktitut. Read about it in Brought down.  I love these "k" words; so does Duncan, apparently. His title is Kokako and Kaka on Kapiti. (And that's in the far south, in New Zealand.) He writes, "And while (you're) distracted by the Kaka, the Weka will skulk around the ground and nose into your bag." And there are the Kakariki, Morepork, Takahe, ... The birds are as delightful as the names.

Through the ears of a child; Jochen, one of the new 10,000 Birds bloggers, names birds with his three-year old son, in Call it by its call.

"Waxwingalicious". Charlie tells us, It's a Waxwing invasion!  A smaller flock is called a fest; White-wing Junco FEST!  Migrating birds, singly or in flocks, captivate Drew, who shares some of his digiscoped photos in Return of the Waterfowl.  Melissa, "... craving the sight of the Hudson River," finds a hawk: Return to Riverside: Rats and Red-Tails. 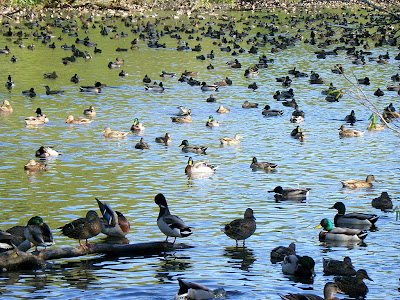 Another invasion. The end of the slough at Reifel parking lot, one October day.
"Birds reveal themselves as confirmed fashionistas," Mike muses, even though Birds never wear clothes.

This is just sad. Alaskan Birds with Beak Deformities. Is this another result of our indifference?

Kyle goes Back to the Birds and finds Woodpeckers: Downy, Red-bellied, and a Yellow-bellied sapsucker on his first time out. "So much for "no time for birding" — I've got the bug again!" 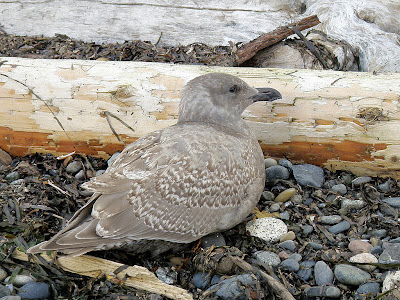 Resting gull, White Rock beach.
These are the blogs included above, in order of appearance.

*Update: a lost e-mail carried this link: Wood Ducks are Pairing Up. Too good to miss.
The next I and the Bird, #139, will be at From the Faraway, Nearby, November 30th. Send your contributions to 10,000 Birds or to T.R. Ryan.

Posted by Susannah Anderson at 1:48 am

Email ThisBlogThis!Share to TwitterShare to FacebookShare to Pinterest
Labels: birding, birds, I and the Bird