Backsides, buttons, and a beautiful beast

My intertidal invertebrates are like birds in the bush; always presenting themselves at odd angles, so you see a shoulder, or the top of a back, or a foot. And from that, you're supposed to say, "Aha! There's Ma Crab hiding in the sea lettuce!" Or, more likely, "Was that leg from a hermit or a crab?"

As for taking photos ... Can you identify these? 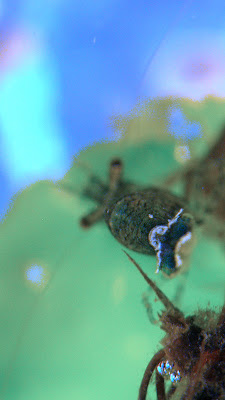 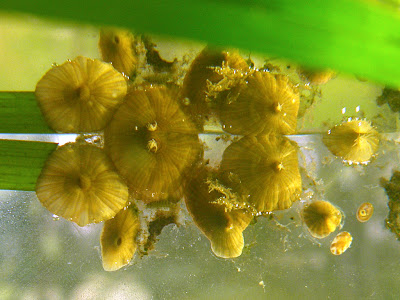 There are two very different kinds of animals here. Can you see the second?
1A: Did you recognize the first critter? Here he is, in a more co-operative mood: 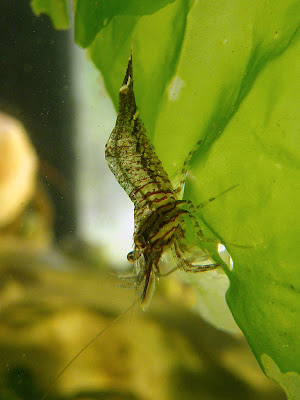 Sitka Coastal Shrimp
He's now about full adult size, just over an inch long. The two smaller ones are starting to catch up.

And 2A: It's a line-up of anemones reflected in the underside of the water surface. Most of them live up there, for some reason. There's a quite large one that wanders around, mostly on the front of the tank, where the current is milder. It has grown to a couple of inches long and across the tentacles. These are all under 1/2 an inch.

In the photo, they are closed down tight. I don't know why they do that; they all open up at once and start looking for food, then they all shut down together. Bedtime.

The other animal is a small scale worm, cuddled up to the base of the largest anemone. (And reflected on the water surface, too.)

3: The trophon (below): a vicious, insatiable, efficient predator. Willing to take on prey three or four times her size. Serves as hunter for the whole community; when she's stuffed herself for the moment, the hermits and crabs and nassa snails move in and polish off the carcass.

She and her two cousins eat all but the smallest barnacles and mussels. I've caught her killing two large clams; she attaches herself to the outside of the shell and spends a couple of days just drilling through. When she's done with it, the clam is dead and opens up, and the shell has a neat hole in it, as perfectly round as I would make with a power drill and a good bit.

A couple of times, I saw her attached to the shell of a hermit crab. I took her off, but she got right back on. I worried a bit, then realized how silly that was; the minute she drilled through the shell and touched the backside of the hermit, he would move out. He's not tied down, like a clam. All that work for nothing! (And maybe that's why I've been seeing hermits walking around nude, looking for a new suit, instead of finding the new outfit first and then changing.) 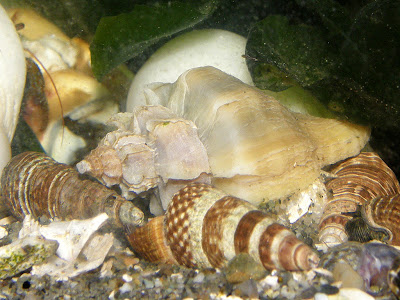 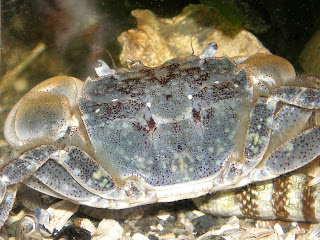 I noticed, when the light is just right, it shines right through the upper shell, so that I can see the innards, and even the pincers moving on the far side. It seems that the carapace is a transparent sheet with spots of pigment scattered on it. Places where this is really apparent is in the center, around those two dimples. I tried to get a photo that showed this, but with no luck this time. In this photo, you can see just a hint of the base of the eyestalks beyond the carapace. I'll be trying again, and again. One of these days, I'll get a good one to show you.
Posted by Susannah Anderson at 1:15 am