A flash of blue

Thousands upon thousands of mallards. Throw in a couple more thousands. Driving in to Reifel Island Migratory Bird Sanctuary, we see glimpses of the slough to the side of the road; usually a few ducks and geese sleep there. Sunday, the water was hidden under a feather quilt of ducks. From the parking lot to the far paths and waterways of the Sanctuary, mallards swarmed like ants.

Except for the chickadees, the small birds were staying under cover, away from the jostling mob. When we came to a blind where we often stand to watch, we just glanced in the doorway. On the far side, beyond the slotted windows, were more mallards, no LBBs.

But I'd seen wasp nests under the roof before, so I stopped to look at the building itself. A brilliant blue ... tiny thing ... zipped from wall to fascia board, to wall, to roof. Looked like a fly. Laurie and I spent about 10 minutes just trying to press our shutter buttons before it bounced away again. 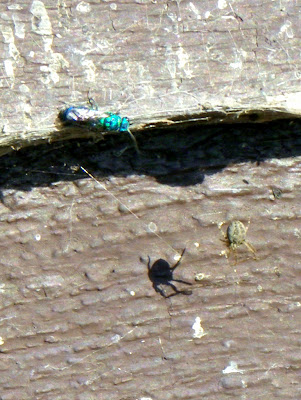 Blurry photo; no time to focus. Just point and click.
The wall was festooned with spider webs. After a bit, I was telling the fly to please, please, please, get tangled in a web so he'd stay in one place for more than a second. He came close, but missed them all. 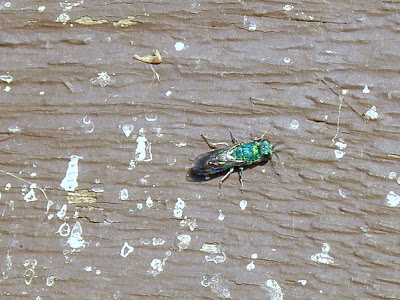 Finally! Got it!
It's a Cuckoo wasp, about 1.2 cm long, probably one of the Chrysidinae. These are kleptoparasitic wasps that come in a variety of bright, metallic colours; reds, greens, blues, golden yellows. They're found worldwide, with over 3000 known species in the superfamily, Chrysididae.

Kleptoparasitic. The word speaks for itself; "klepto" - theft, "parasitic" - living off the labours of others. These little wasps lay their eggs in the nests of larger wasps and bees.

An alternative life history is found in some species where the cuckoo larva eats the host’s egg or young larva, then scarfs down the food stored for the host (paralyzed insects, spiders, or pollen and nectar). (From Cuckoo for Cuckoo Wasps, from Bug Eric)

The hosts whose nests the wasp invades are bigger, more aggressive, dangerous. The wasp survives, in part because of its extra-thick exoskeleton. And they can roll themselves up in a ball like a pillbug, protecting the delicate underparts. I'm thinking their speed may give them an advantage, too; beside "our" wasp, a bee would seem to be a big, lumbering slowpoke.

One more thing, from Bug Eric;


That durable cuticle is pitted, grooved, and otherwise sculptured, creating facets that reflect various wavelengths of light and give the insects their bright metallic colors. Pigments have nothing to do with their jewel-like quality.

Among the spiders that weren't catching Little Boy Blue, we saw this one: 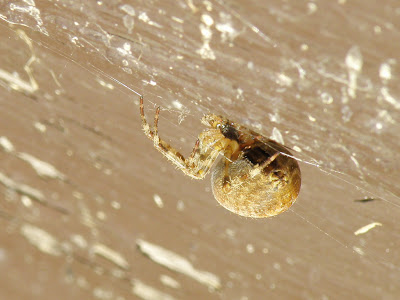 Fat spider, with a belly as big as a wild crabapple. If you click on the photo, you can see how she holds the web with hooks on the end of her legs. 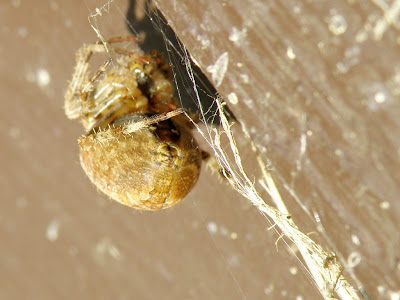 Taken from half an inch away. At least she stayed put. The spinnerets at the end are still holding the latest addition to her scruffy web.

BugGuide has photos of the Cuckoo wasps, and info. Here's another info page. And Bug Eric's blog. The post I quoted from is here. He has more details and links there.
Posted by Susannah Anderson at 2:00 am