It's that time of year again! Limber up your fingers, dig out the crowbar, charge the batteries in the camera; the famed International Rock Flipping Day is upon us! 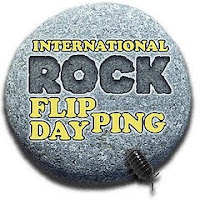 Mark your calendars: IRFDay this year will be the second Sunday in September; Sept. 12. That gives us a bit over two weeks to find a suitable source of rocky material.

If you're new to Rock Flipping, this is what it's about (from last year's announcement):


Rock Flipping Day was started by Dave Bonta and Bev Wigney in 2007. The idea is simple; in Dave's words,

"...we pick a day for everybody to go outside — go as far as you have to — and flip over a rock (or two, or three). We could bring our cameras and take photos, film, sketch, paint, or write descriptions of whatever we find. It could be fun for the whole family!"

"On 9/2/2007, people flipped rocks on four continents on sites ranging from mountaintops to urban centers to the floors of shallow seas. Rock-flippers found frogs, snakes, and invertebrates of every description, as well as fossils and other cool stuff." 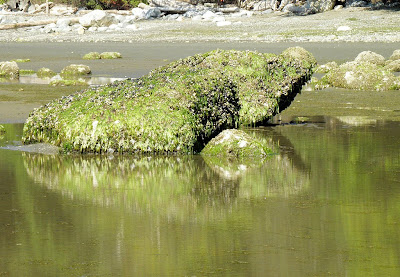 Interesting rock. But too big to flip, I think.
And here's a quick rundown of the procedure:
There is a handy badge available for your blog, here. 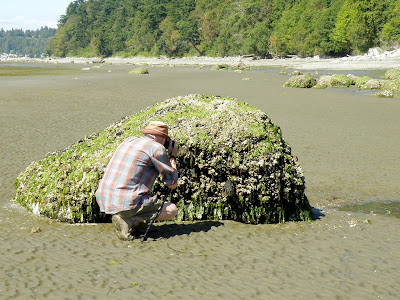 Laurie finds another rock. Point Roberts. Too big, again. Maybe with a backhoe.
Again, as we said last year, remember:


One thing I forgot to do in the initial post is to caution people about flipping rocks in poisonous snake or scorpion habitat. In that case, I’d suggest wearing gloves and/or using a pry bar — or simply finding somewhere else to do your flipping. Please do not disturb any known rattlesnake shelters if you don’t plan on replacing the rocks exactly as you found them. Timber rattlesnakes, like many other adult herps, are very site-loyal, and can die if their homes are destroyed. Also, don’t play with spiders. If you disturb an adjacent hornet nest (hey, it’s possible), run like hell. But be sure to have someone standing by to get it all on film!

(Last year, Will Rees, in snake country came across a cottonmouth. Good thing he was cautious and alert!)


A reminder to all rock flippers that they (the rocks) should be flipped back into place. If there are critters underneath, don't place the rock back on top of them, move the animals to the side, replace the rock and let them scurry back.

Conservation Maven discusses a study on the effects of rearranging rocky habitat:

With an elaborate experimental design, Pike and his team were able to show that altering the position of rocks negatively impacts reptile habitat by modifying crevice microconditions that species prefer.

The study also demonstrated that the impact is easily reversible by restoring the rocks to their original position.

So, be careful, be aware, and leave no traces of your visit, and all will be well. 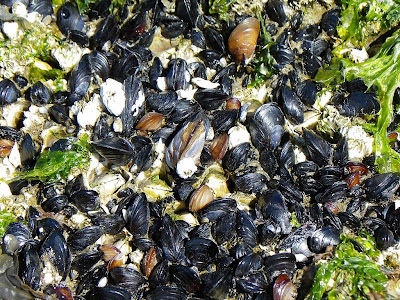 No need to flip this one. Everything's on top.
What will we find this year?
Posted by Susannah Anderson at 2:39 am