We ventured down to Point Roberts for the day. If it were not for the long wait at the border, going both ways (half an hour going south into the US, about 15 minutes coming home; very slow, for a small crossing), we would plan on visiting often. Next time, we'll go on a weekday; the line-up may be shorter.

Point Roberts is a small spit of land, a snippet cut off from Canada and allocated to the US, because of inadequate mapping before the boundary was agreed upon. The line across the continent goes straight from the Great Lakes to the Georgia Strait, where it bends to leave all of Vancouver Island inside Canada. It wasn't until this was ratified that the Tsawwassen area was surveyed, when it was discovered that the very tip was below the line. This has produced some odd effects; for example, school buses take children from Point Roberts to school in Blaine, crossing the border twice enroute.

It's sparsely populated; the lots are enormous, and there is room to breathe between clusters of homes. Most of the population in the summer are Canadians. In winter, there are fewer than a couple of thousand residents. On the southwest, the land is bare and flat, sloping down to a clean, stony beach; there's forest on the east, cut off from the sea by tall sandstone cliffs. (The geology is interesting; see Wikipedia.)

It's the first time we've been there on our own, so we followed our noses, taking whatever turn appealed to us, exploring, ending up skirting the coastline from the marina to Maple Beach, across the street from our usual parking spot in Canada, and back to customs along the border, looking at all our landmarks from the backside.

The tide was in, but we spent an hour on the beach, watching birds and boats, and the blue, blue horizon. A flock of surf scoters dived in unison, coming up again all together in a close circle. This is the first time I've seen that behaviour; most diving ducks come up singly.

We saw, from a distance, a flock of dark ducks with white underparts at the rear. In flight, they flashed a startling white V at the tail. I haven't been able to identify them; any hints? 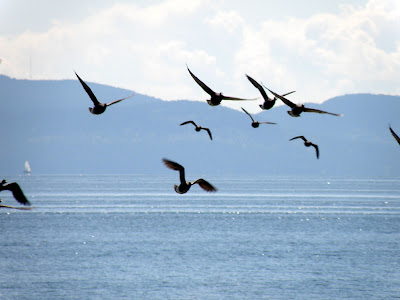 And turned around, facing us.
*Update: in the comments, Amie Roman identifies them as Brant geese. Thanks, Amie!

And this topped off the day; a lifer! Oystercatchers. 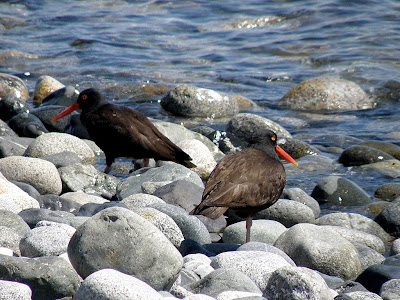 "Peep!" A loud "PEEP", not the shy "peep" of the yellowlegs and sandpipers.
Black heads, dark brown bodies, pinkish legs, big feet. And those amazing beaks; long and heavy-looking, and a fiery red. The eyes are yellow, with a red ring around them; jet lag eyes. They poked among the rocks just at water's edge. I didn't see them find anything, but they eat limpets, mussels and clams. And oysters, of course. 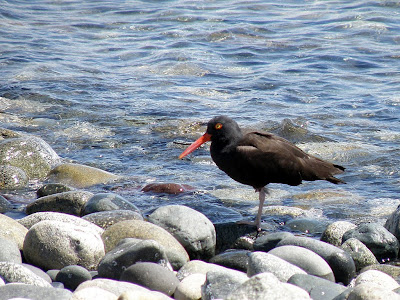 Standing on one leg, warming the other toes.
A minute or two after they flew away, a small flock of sandpipers rose up from the same area, and sped away, "peep, peep, peep"-ing as they went. We hadn't even seen them, we had been so engrossed watching the oystercatchers.

We'll be back; we want to see those cliffs from the shore side again, and we will eventually visit the marina. If the border crossing isn't too bad on the cliff excursion, that is.
Posted by Susannah Anderson at 3:07 am