My daughter's Strathcona house, where we were housesitting last week, is a heritage home, dating from just before the turn of the 20th century. It's been renovated, some twenty years ago, but still retains its warped plank floors, intriguing angles, and vintage bathroom fixtures. And it's had one hundred and some years to collect silverfish.
I've been seeing the odd one scooting back under the old bathtub or under the washing machine in the basement since the first time we house-sat, three years ago. I've tried to catch one, but they are usually too quick for me; slippery, slithery, shiny fish-like insects that go darting undercover when I open a door. By the time I've taken the first step, they are gone.
But this visit, a big one ventured too far towards the middle of the room. And I had a bug-catching jar in my hand. Got her!
Here she is: 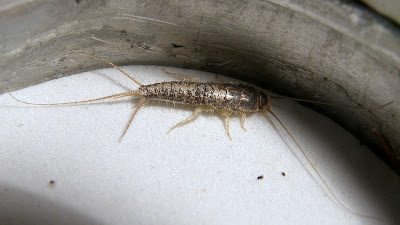 Tinned silverfish, Lepisma saccharina.
I have a mixed reaction to silverfish: I know they are pests - they eat books; that's enough for me - and knowing that there's something watching me from underneath the baseboards gives me the shivers; but they are also oddly attractive, as sinuous and glittery as a minnow. When I step on one, all that remains under my shoe is a fine, silver powder; fairy dust.
They are small, wingless insects, about 1 to 2 cm. long, not counting the antennae and tail appendages, which add another two body lengths. The body is tapered, covered with shiny scales, and flat enough to slither between the pages of a book. Their most distinguishing feature is the tail arrangement; a three-pronged fork of antennae-like appendages; this earns them the name of "bristletails".
They do not bite. Nor do they sting. They do not carry human diseases. They could be considered harmless, except for that habit of eating books. And ...

They're welcome to the dead insects.
Look at the head end: 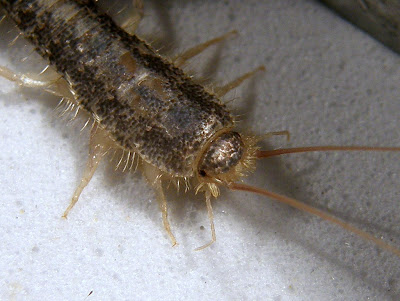 Needs a shave.
I didn't know this about them; they're hairy. Between the fish scales, blond hairs stick straight out. Even the antennae and tail filaments are hairy. And they wear a beard.
The head and body look, close-up, like hammered aluminum. In spots, like on the upper back here, the scales have rubbed off, showing a brownish exoskeleton. The underparts are pale, like the almost-transparent legs. Young silverfish are pale, too, and they don't develop the silver scales until the third molt.
This gal was very active, and I had to put her in the fridge, then photograph her with her tin on top of an ice pack. I watched her wake up, gradually, under the lights. Without otherwise moving, she raised one antenna and slowly examined the area, as far as it would reach. Then the other. Turned herself around and repeated the testing. That done, she started running again. Photo session ended.
And the tail end: 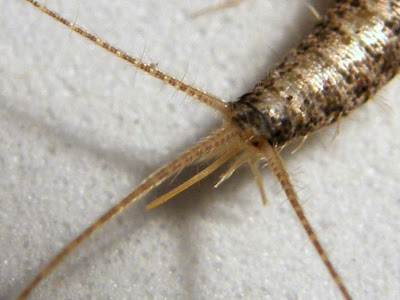 Hairy appendages.
I found a helpful photo, with anatomical labels. The centre "tail" is simply called the "medial caudal filament": the "centre tail hair", in ordinary English. The two side ones are cerci, organs all insects have, but which are usually much smaller. They may be used as sensory organs. The female silverfish detects the male's sperm capsule with them, during the mating ritual. (Wikipedia) The short appendage in the centre is the ovipositor; this is a female.
She can live up to four years and lay over 100 eggs in that time. Not in my house, though.
Useful link: how to distinguish silverfish from firebrats, here. (Scroll down.) Basically, if it's living in your cold and damp basement, it's a silverfish. If it's in the furnace, it's a firebrat.
.
Posted by Susannah Anderson at 11:41 pm