This will be a sad post, and if gruesome photos disturb you, you're better off to skip it and go on over to The Birdchaser, I and the Bird #96, for a cheerful oyster hunt.

I wrote, last Monday, about the house finch with an infected eye who stayed on the chickadee feeder after dark, until I chased him off. This is an update on his condition.

He was back on the feeder Monday night, and I had to wave my hands around near him to get him to leave and find a warmer site for the night.

Tuesday morning he was back, poking around the place where the bucket of seed usually is, and squalling at me when he didn't find it. A bit later, I found him sitting on the chickadee feeder perch, sleeping; I woke him up, but he stayed put. This time, the flash didn't scare him off, either. 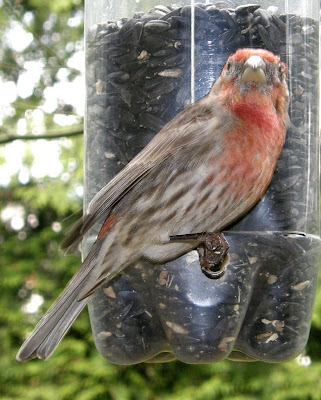 He looks almost normal. Except for a bit of crustiness around the eye, and his sleepiness and lack of concern at my approach, he seemed ok. When I finally got him to leave, by shaking the feeder with a stick, he was navigating fine.

He wanted to spend the night at the feeder again. I wouldn't let him.

Wednesday was a repeat; begging for food, sleeping on the chickadee feeder.

Thursday. In the morning, there was an outburst of chirps and squeals; I went to see what was up. A chickadee was on one arm of the feeder, the house finch on another. A pine siskin was attacking him, beak to beak, the two of them yelling as they jabbed at each other. The pine siskin saw me and left, and the finch began digging for a black oil seed. Good! He's got some energy, and he's eating! 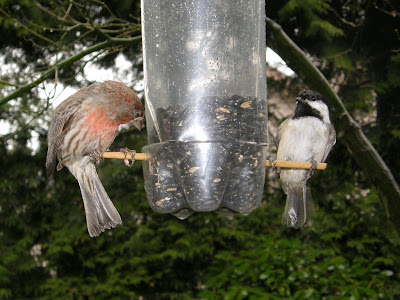 Dark photo because it's pouring rain.
He stayed put most of the morning, sometimes eating, sometimes sleeping. A couple of times, I rousted him out, once prodding him with a stick to make him leave the perch, but he always came right back.

I got a chance for a close examination. What I saw was not encouraging.

The right eye (from his point of view; on the left in the photo) looks more or less normal. But even from a front view, the left side is swollen. And notice that spot below the eye. It was there, but not so pronounced, on Monday, too. (Look at the top photo again.) 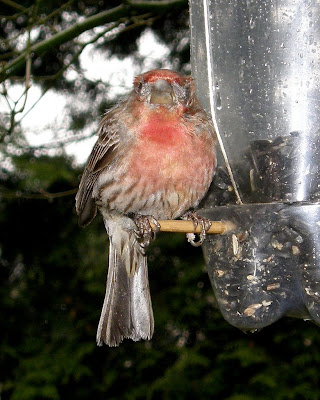 But the left eye is a mess. And that spot looks like a hole. Or is it an abscess?

He flies ok, although he has a bit of difficulty coming in for a landing. 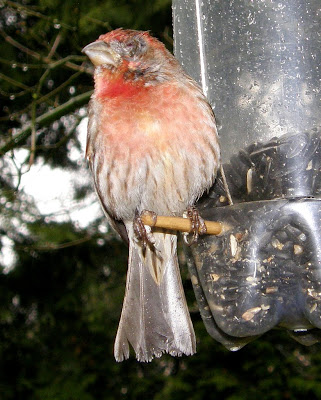 One of the symptoms of salmonellosis is diarrhea, with "pasted vents" as a sign of this. I had seen no evidence of this, yet, and he was cooperative, so I photographed his butt. Everything seems fine. No smearing, no "pasting". But look at the feet: 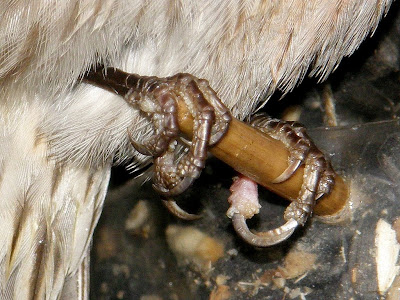 One talon is badly inflamed. Poor guy; sore from head to toe.

So, now I'm wondering. Maybe it's not salmonellosis. I hope not, though I'm still taking precautions (bleaching everything, every day). Could it be House Finch Disease?

Birds infected with this disease (also called mycoplasmal conjunctivitis) appear to have red, swollen, runny, or crusty eyes; in extreme cases the eyes become swollen shut or crusted over, and the bird becomes blind and unable to fend for itself. You might observe an infected bird sitting quietly in your yard, clumsily scratching an eye against its foot or a tree. While some infected birds recover, many die from starvation, exposure, or predation.

And will he recover? I do hope so; at least, he shouldn't starve. He was eating well.

Or is this, seeing that his foot is also damaged, a result of an accident or a run-in with a predator?

Life is so difficult for these little ones, so surrounded by dangers and so alone. We see them bouncing around, singing, flying, preening, splashing merrily in the bath; they look happy, and we don't often notice their frailty.

Little red finch, I'm rooting for you. I'd help more if I could.

(And now, to cheer yourself up, go on over to The Birdchaser.)