Gotta have my spider fix!

It's been a long time (or so it seems; it was December 7th.) since I found any tiny critters to blog about. It's too cold; even the sowbugs have made themselves scarce. I found myself wandering around looking at the corners of ceilings, and under flowerpots or under the outside chairs.  But they're all gone, sleeping or dead.
I thought, when I came to house-sit, that the situation would change; after all, it's a heritage house. (Translated, that means, "really old, with original lumber and lots of cozy cracks.")  And there were plenty last summer. (See "Fifty-six legs") I brought a couple of pill bottles to collect them with, and wondered if, maybe, I shouldn't have packed more.
But there's not a bug in sight. I checked under the sinks, and down in the basement and even the crawl space. All I found were a couple of tiny, pin-head-size house spiders.
This seems to me to be an odd situation for the Lower Mainland. When I lived up north, I took it for granted that we would have no multi-legged critters from October to March, but here? In this damp climate, I don't think I've ever seen a winter without an invasion of sowbugs into the damp corners under sinks and behind bathtubs, and the spiders that hunt them. Or in these older homes in urban areas, a silverfish or twenty.
I took a flashlight and thoroughly inspected every cranny here. And finally, I found it; behind the furnace, where it's always warm and dry, a spider is hanging. Twisting, and making myself as skinny as possible, I could reach far enough to get a photo! 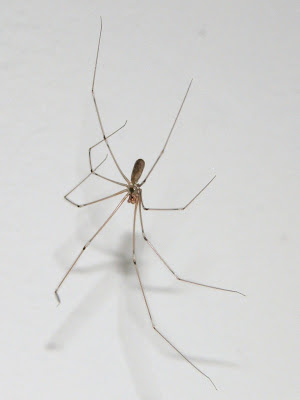 Ahhhhh! That feels good! And isn't she elegant! 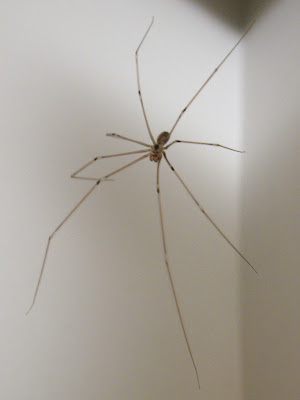 Almost the same photo ( I didn't have much maneuvering room), and not as clear, but I got a face shot.
This seems to be the same kind as one I found in the summer. Now, checking back, I realize that I didn't ID it because the computer went down.  It looks like it could possibly be one of the Longjawed Orb Weavers, the Tetragnathidae, but I can't be sure.  I'll send it in to BugGuide for an ID.
Now I'm wondering; what on earth is she getting to eat?
.
Posted by Susannah Anderson at 2:11 am