On our knees in Watershed Park

It's a good year for mushrooms in the Watershed Park; every step we took the other day revealed more. Most were the usual tiny blue-stemmed "umbrellas" or the slimy yellowish ones that look almost like dinner rolls. The slugs beat us to them, though. 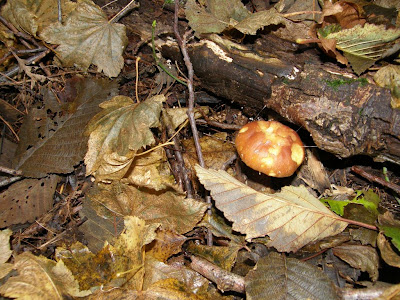 Slug-nibbled "dinner roll".
And they got almost all of these, too: 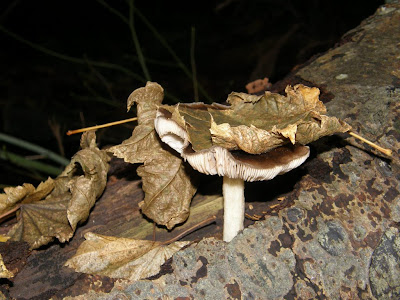 Hiding under a leaf. The slugs will find it, anyhow.
But they left us the really tiny ones. 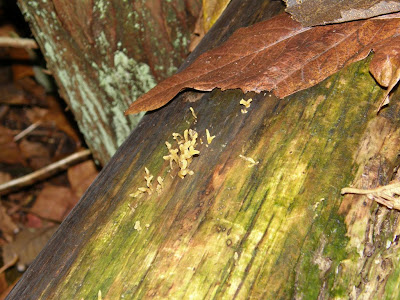 Inch-high yellow fingers growing out of a log. With a smear of green stuff, and pale blue lichen. 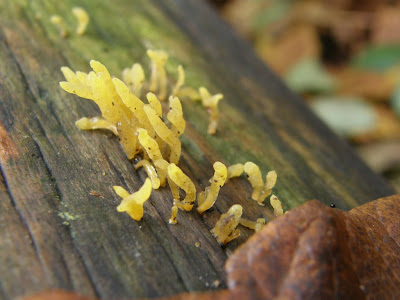 Zooming in.
Staghorn Jelly fungus (Calocera cornea), I think.
I hadn't even seen these next ones, until I looked at the photo. Behind the moss, see that hairy thing?(It helps to blow it up to full size.) I think it is a Douglas fir cone. I don't know what the growth is, though. 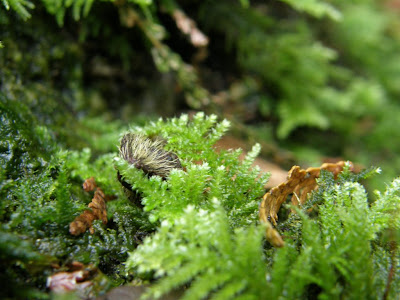 On a well-rotted branch, maybe an inch across, a clump of pure white 'shrooms. 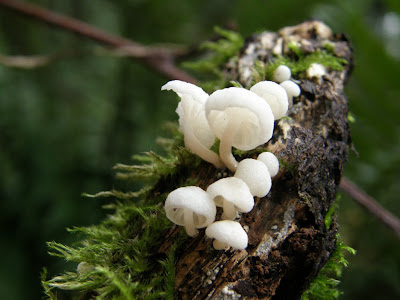 That little dark dot on the second-bottom mushroom is a spider. 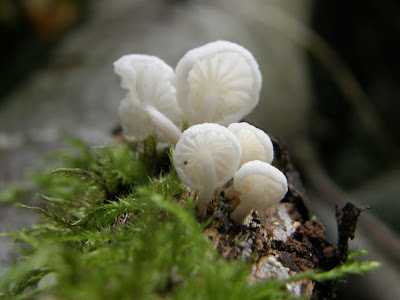 Mushrooms and spider, from underneath.
I almost kneeled on these, trying to get a photo of the yellow jellies. I saw them just in time. 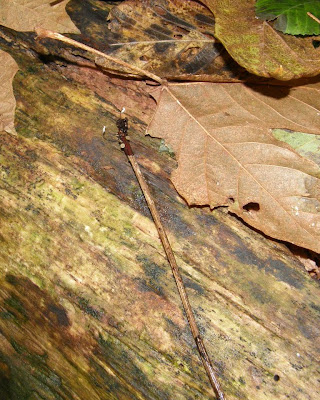 See the white dots on the big-leaf maple stem?
Here they are, from a 1/2 inch away: 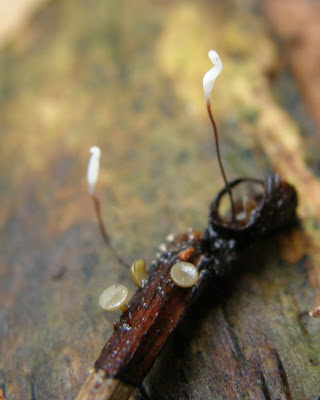 Is that two, or three, species of mushrooms? 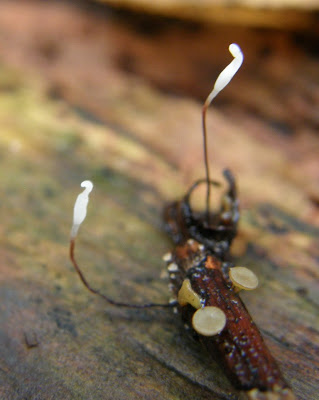 From another angle.
These slimy growths are in many of the rotting logs. When we have photographed them before, they responded to the flash by turning brilliant white, so that all shape and features disappeared. And it was too dark in the Watershed to do without flash. 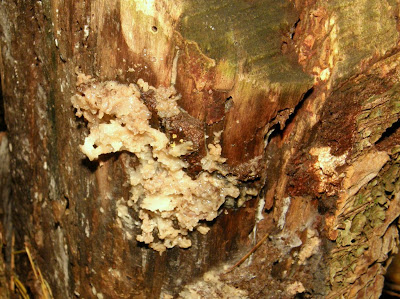 I thought; "diffuser! I need a diffuser." But I had forgotten to bring my latest home-made one (a slotted film canister). On the spur of the moment, I picked up a yellowing maple leaf, and held it in front of the flash. It gives a yellowish cast to the photo, but at least the blob is visible. I'll have to try that again, and aim for a closer look.

Just as we turned to go, I saw this long log. Those little dots are turquoise mushrooms, cone-shaped, and too small to photograph without better light. I picked up some a year ago, and got a few inadequate shots at home with the old camera.

I tried to break off a section of the log this time, but this one is not rotted; I couldn't get even a splinter. Next trip, we bring a knife. 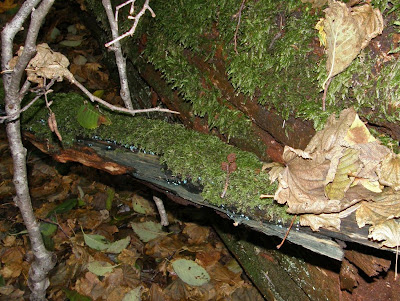 Tip of the log, with moss and blue cups.
Equipment to carry next time: sharp knife, bottles, some source of extra light (good flashlight?), diffuser, magnifying lens (for me, not the camera). Bandage material; the lack of that sent us home early. And Laurie left a trail of drops of blood from a scraped leg. The price of enthusiasm. He's recovering nicely, though.
.
Posted by Susannah Anderson at 1:23 am