Somebody must have been to the vacant lot before me: 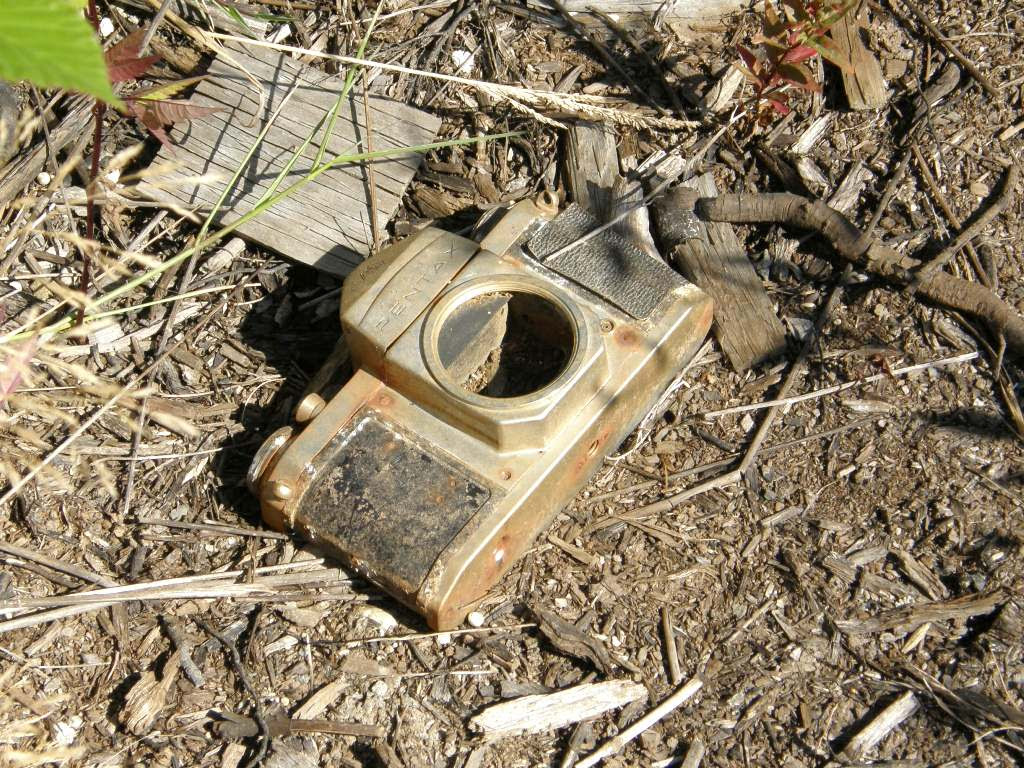 The lot across the street from us has been lying vacant for at least as long as I've been here. Someday it will turn into housing or a mall; for now, the lower third (about a block square) is a dumping and storing ground for construction and demolition materials. Piles of gravel appear here and there, sit for a few months, and disappear. Slabs of broken cement jut out of the ground. Deep tractor ruts dig through older truck tracks. Nothing stays put for very long. A disturbed site. Very disturbed. 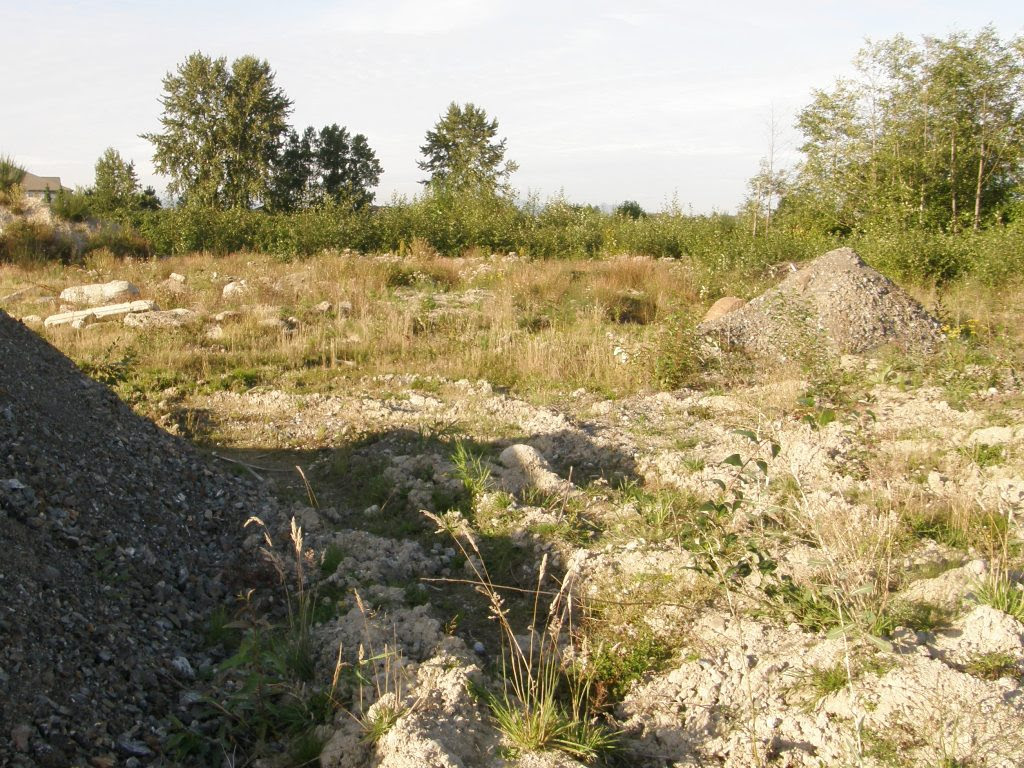 One of the tidier corners of the lot.
The weeds strive mightily to reclaim the land for themselves. No rockpile or abandoned piece of machinery escapes their notice; they sprout, bloom and go to seed even on new sandpiles. Thistles, mallows, hawkweed, hardhack, clover and grasses, daisies, mustard, bitterweed, bindweed, tansy and goldenrod, plantain ... I saw all of these, and more, here this week. 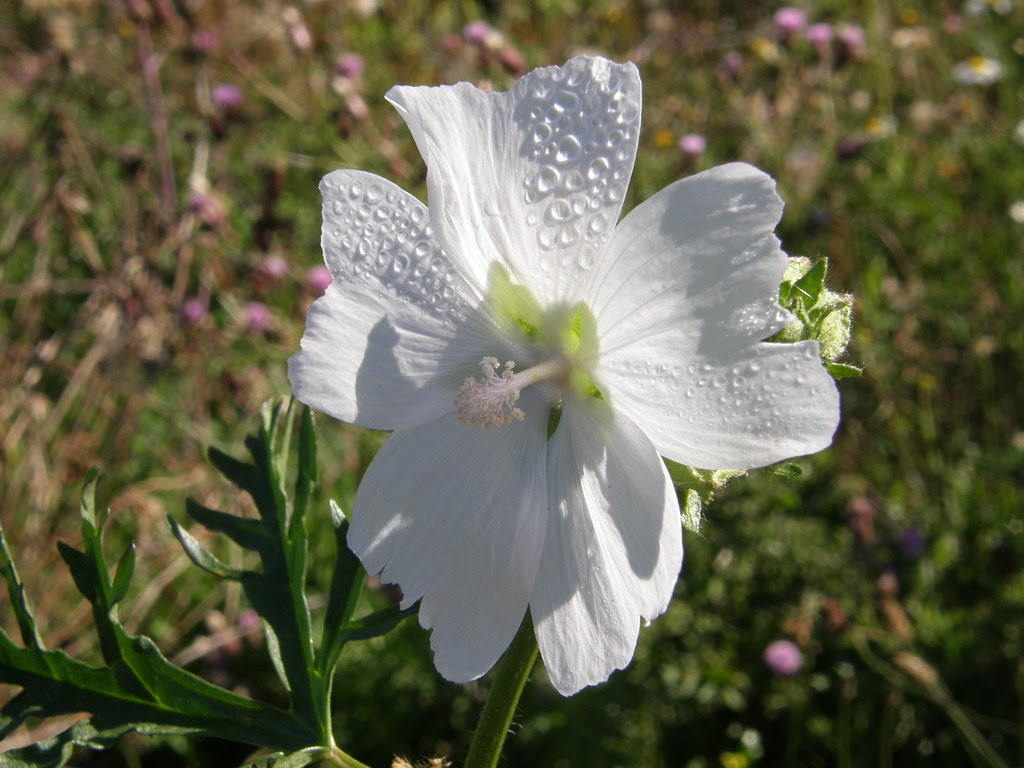 Meadow checker-mallow, with dew
Where there is so much plant diversity, there must be a thriving beastly population. I went looking for it, under the rocks.

First rock: a spider that scuttled out of sight before I could press the shutter. And something so tiny that I could only see that it moved. I took a photo, anyhow. Nothing turned up on it.

Second rock: more of the same. A pink tip of an earthworm that sucked itself down under the soil when the sunlight reached it. Third and fourth and more: ditto. An occasional tiny brown slug.

Eventually, a tiny spider paused to look before he ran: 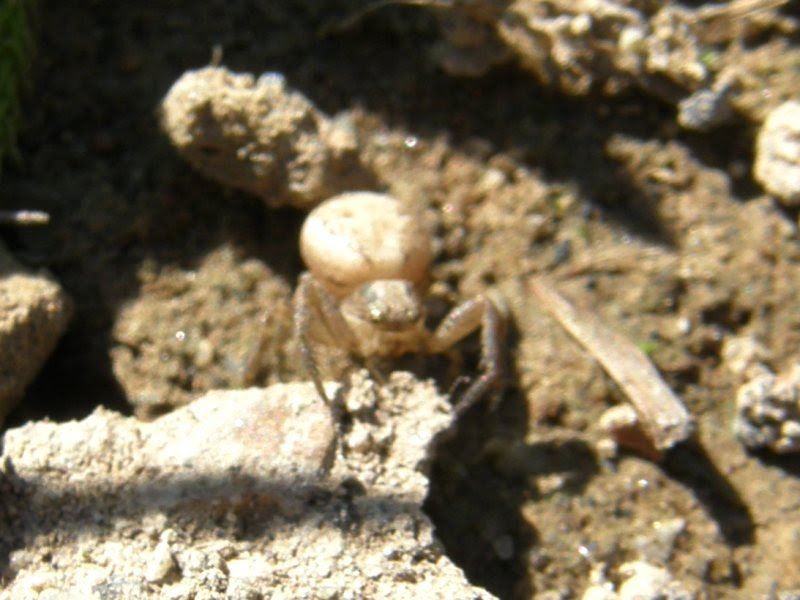 Checking me out.
It wasn't that there was no animal life; it was all around. Above ground. Wasps and flies and ladybugs, grasshoppers (3 kinds), cabbage white butterflies. And some cute yellow caterpillars in the tansy. Just not much at ground level.

Maybe it was too hot and dry; I forced my way through a new thicket of alders to the old creek bed. It was damper down there, even though the creek no longer runs down it. 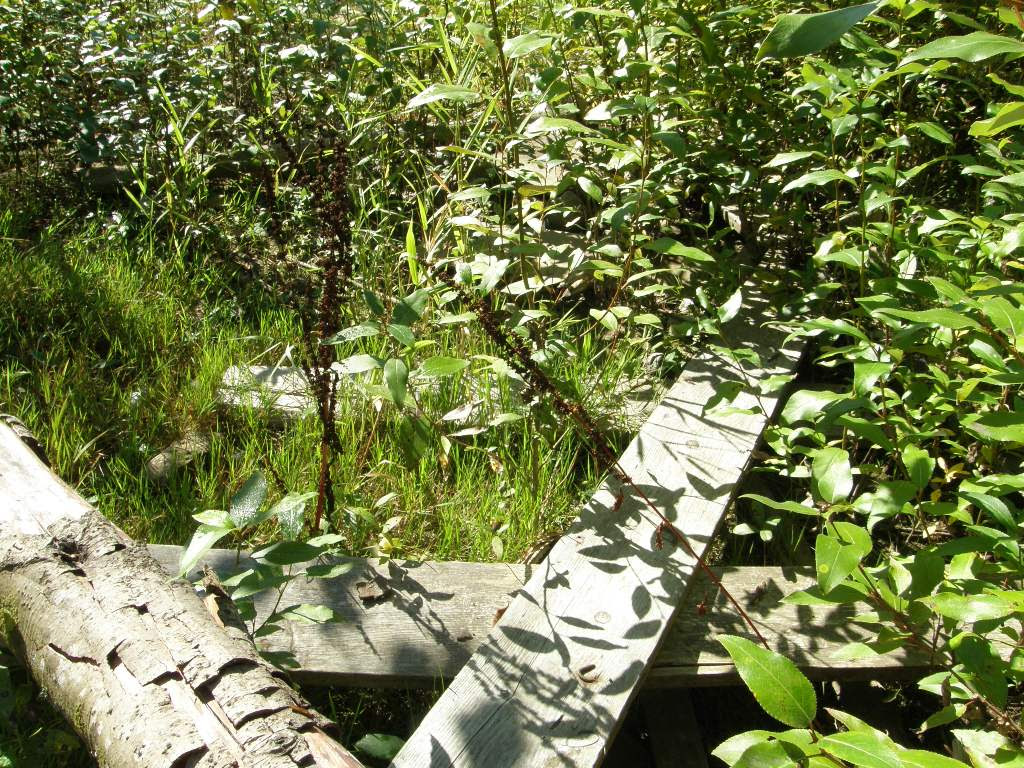 Creek bed. The boards were part of a kids' walkway, back when the creek held water. 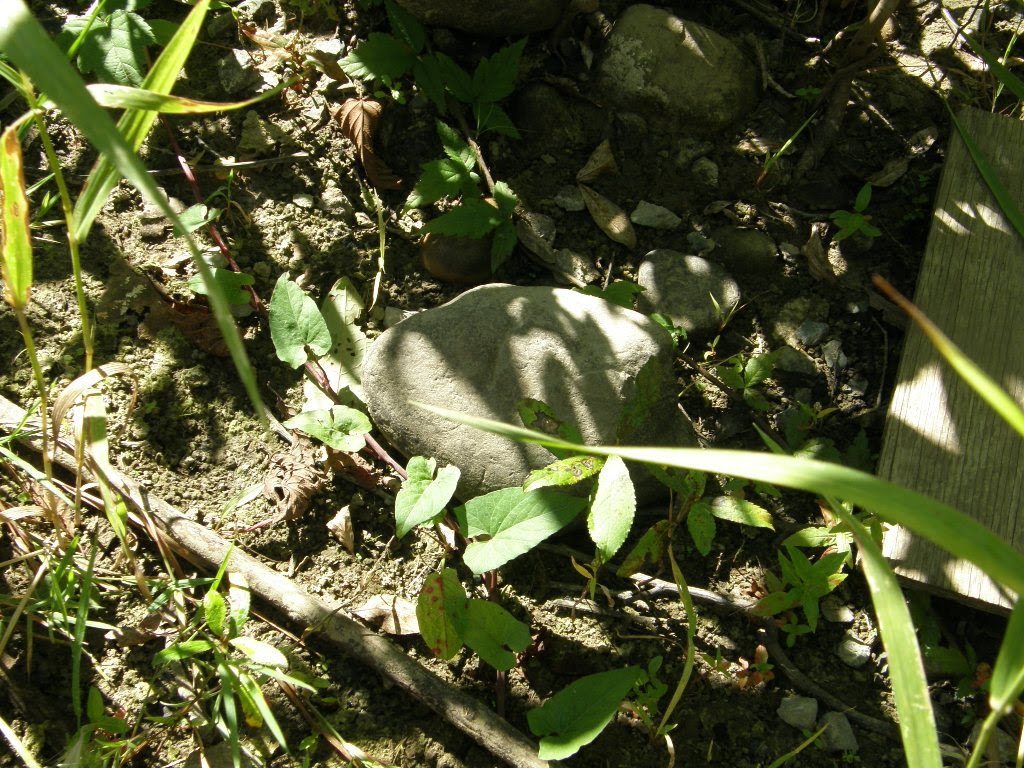 Rock in the creek bed. Looks promising.
And here I struck pay dirt. 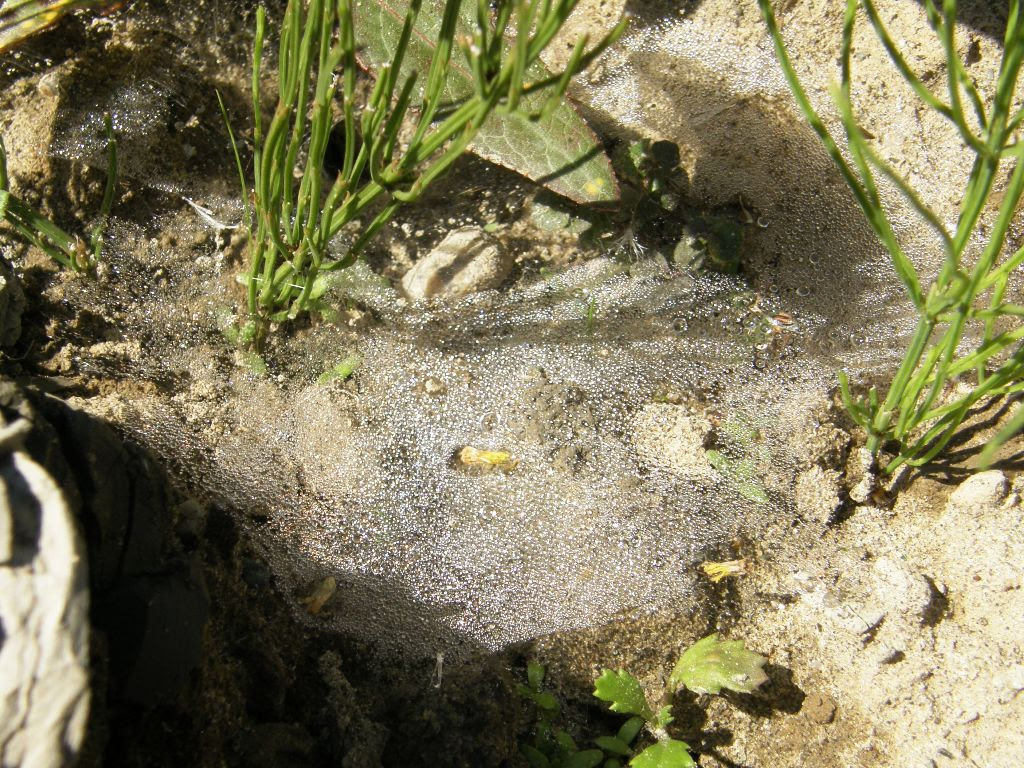 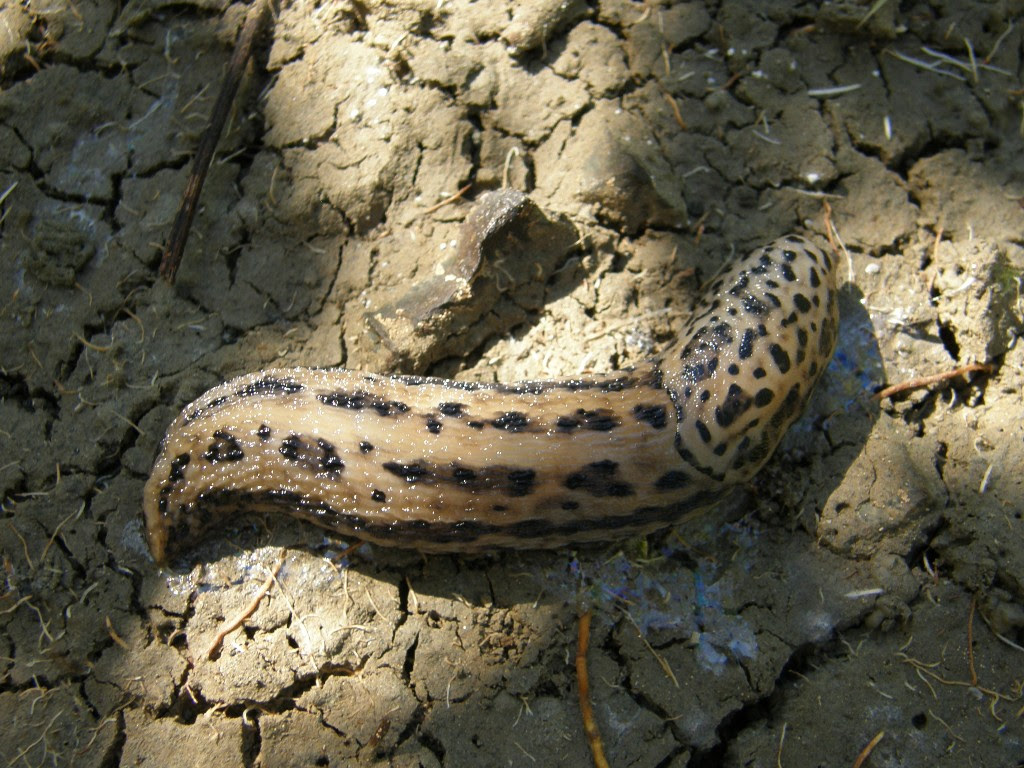 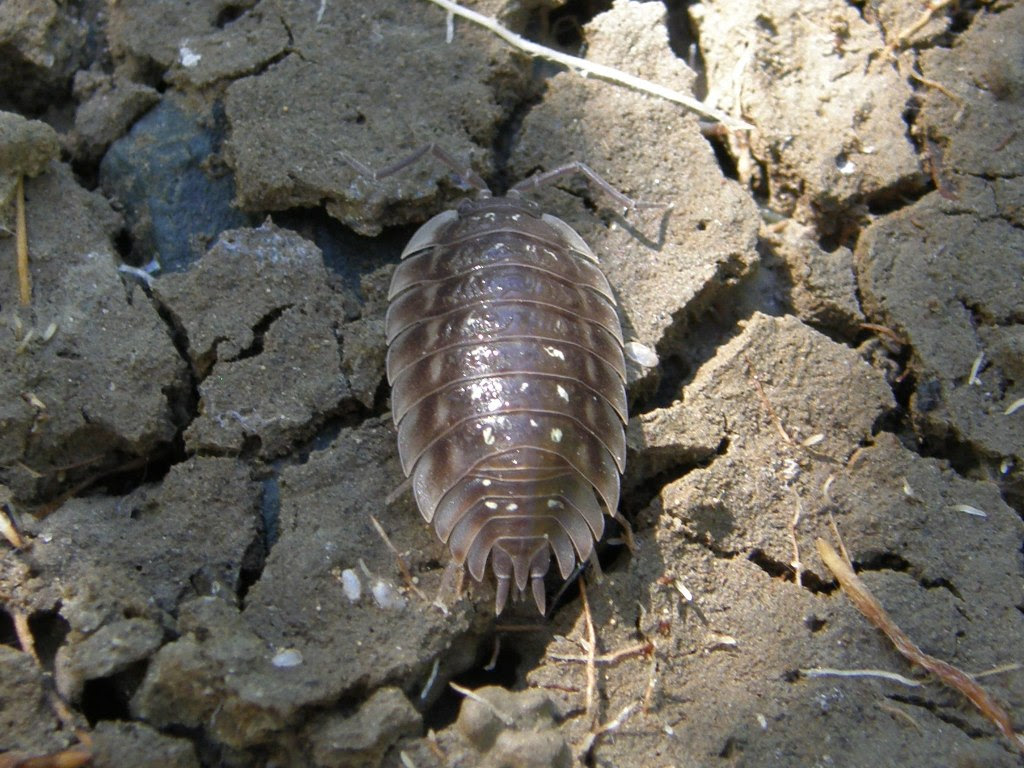 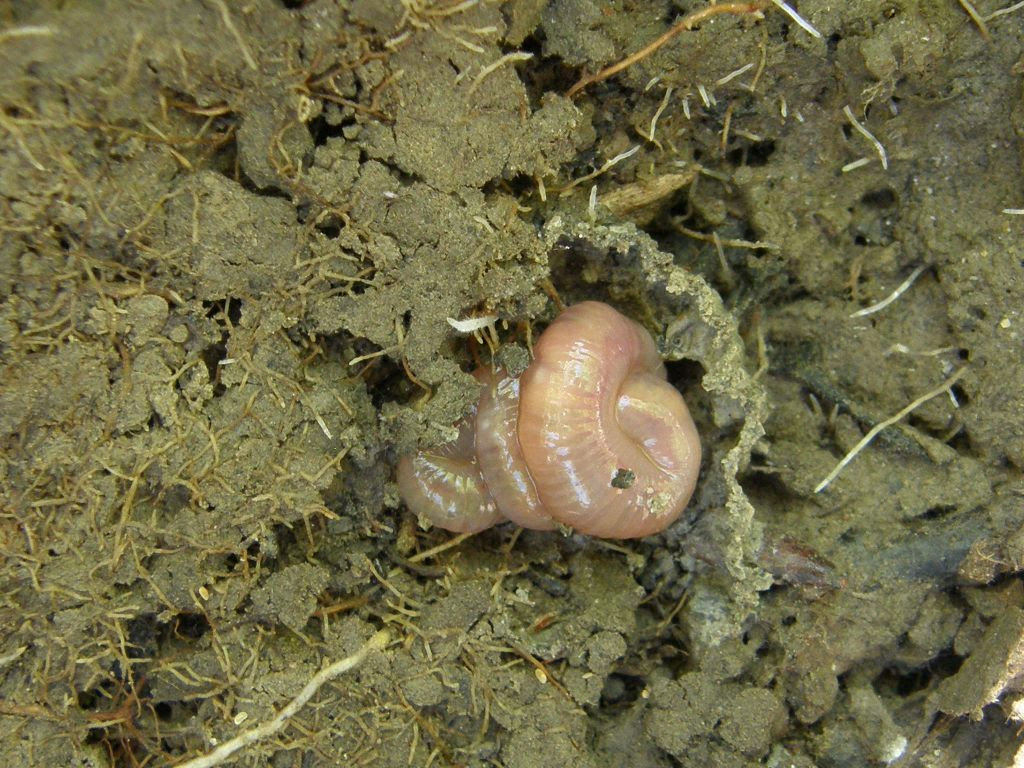 And an earthworm all coiled up in a knot.
Every rock I flipped down here harboured repeats of these, plus assorted tiny spiders.

Time to head home. I took the long route, across the hill that separates this area from the north two-thirds, and along a treacherous path through the blackberry patch. I had a couple of bags with me, and picked a pint of blackberries, ripe and sweet, on the way. 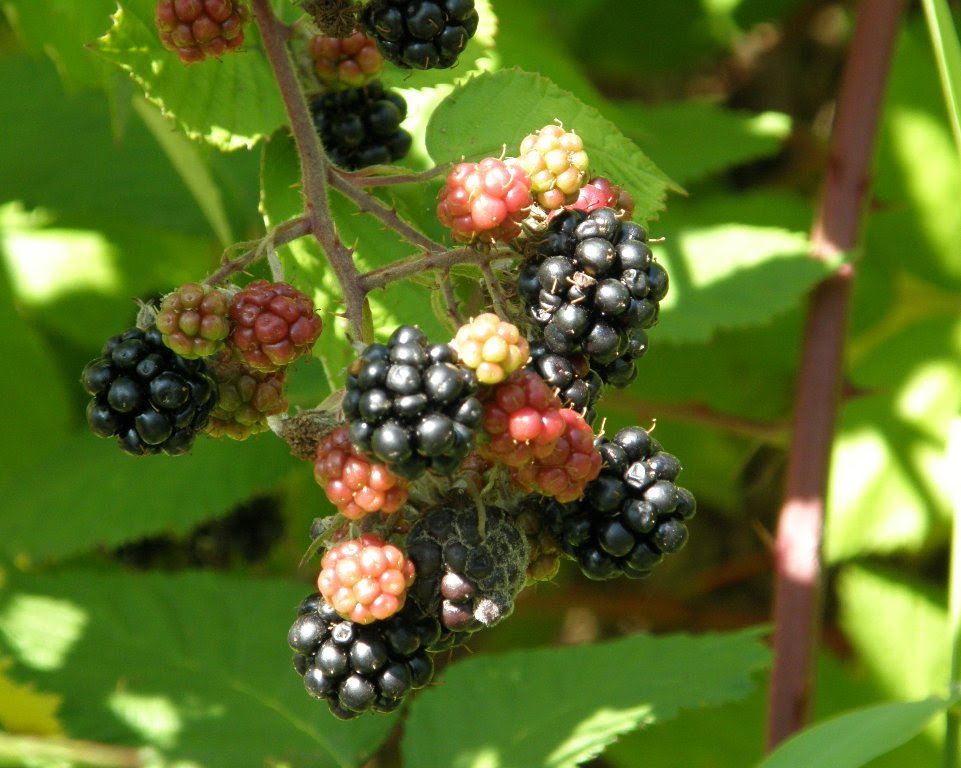 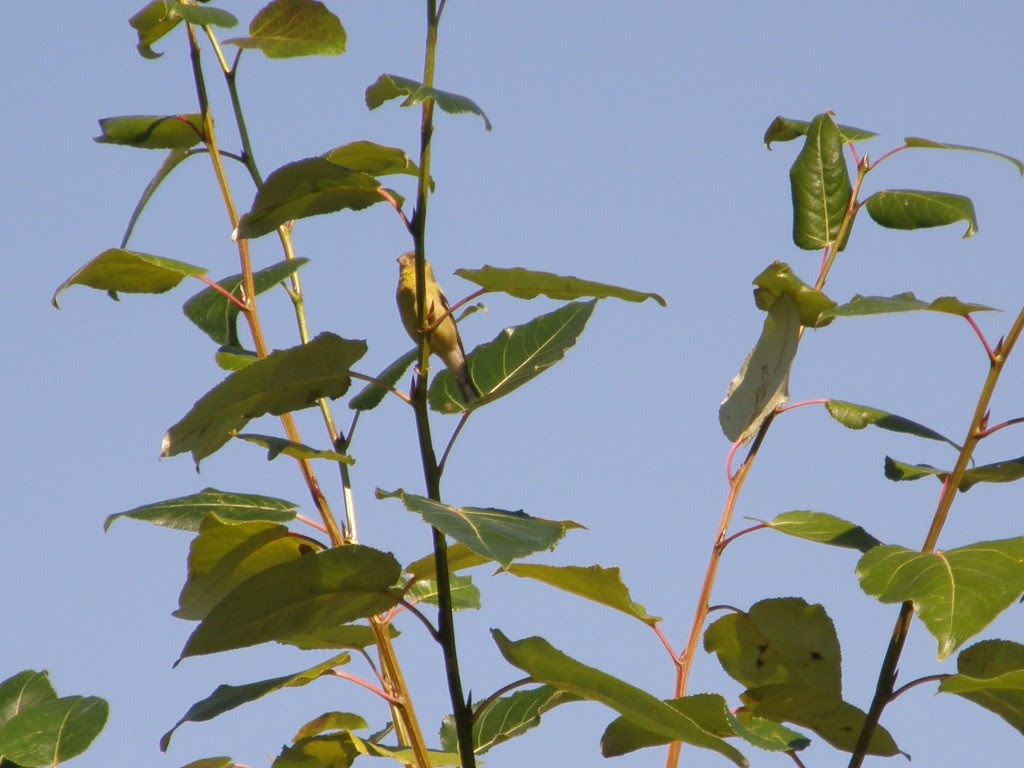 Goldfinch, pretending to be a leaf.
On the far side of the blackberries, 6-foot-tall grasses dominate. Laurie plowed his way through these a couple of days ago, but on my own, I stuck to the trail, across the boggy patch. Under a rock there, I saw a bare shimmer of something wet-looking. 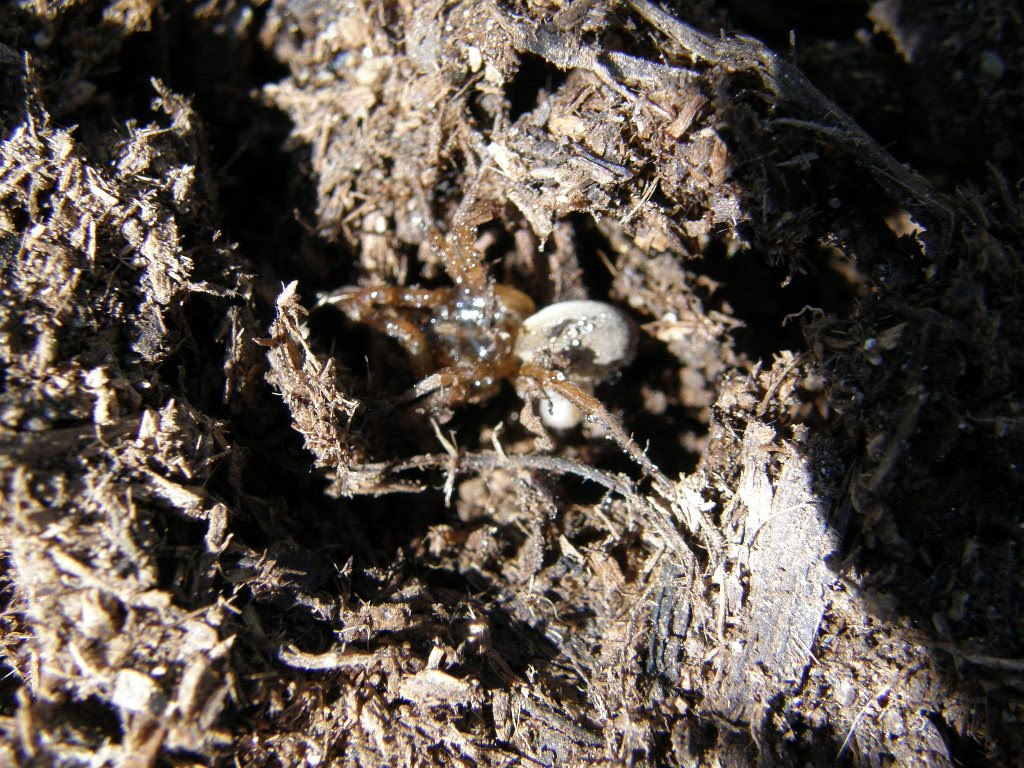 Barely there.
Only in the full-size photo could I recognize it; a whitish spider. 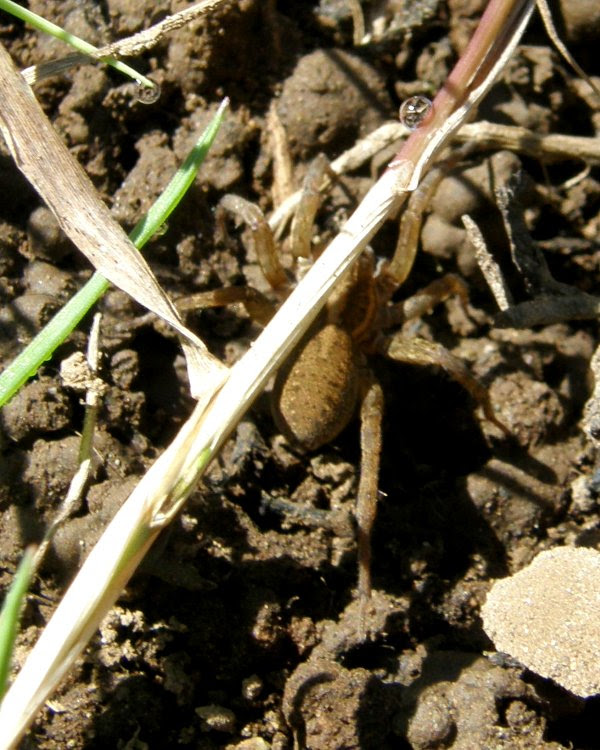 Further on, under a board. (That was cheating. Sorry.)
And the last rock, back across the street, on my way home. A circle of rocks around a drain sheltered a tribe of ants. (Two sizes of all-black ants, small and large mixed together.) They were hard at work under one of them, doing a spot of butchering: 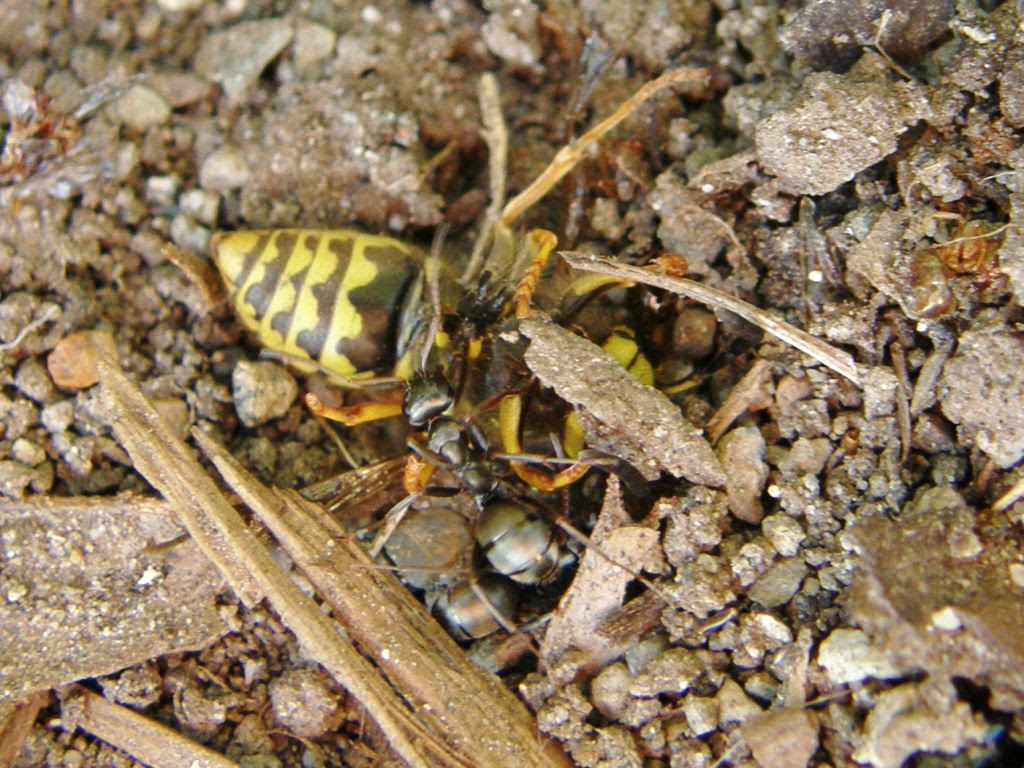 I wonder; had they killed this wasp themselves, or just scavenged it?

When I flipped the biggest of these rocks, a large spider ran around frantically, zigging and zagging all over before she finally escaped into the weeds. On the underside of the rock, caught in her web, I found this: 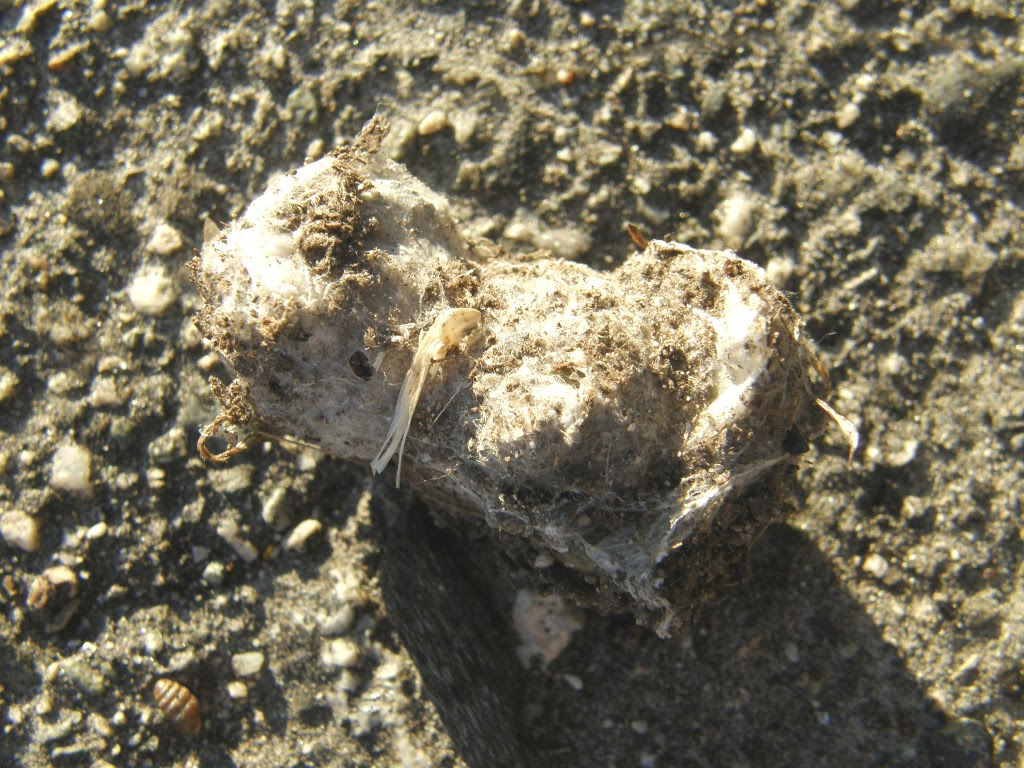 I don't know what it is. Prey, all wrapped up? Two or three blobs of eggs? It's about an inch long, as thick as my little finger. If it's eggs, I don't want to break it open, so I've saved it to see what happens.

I put everything else back carefully, the way I found it.

And that's it, for flipping rocks. But we discovered more in that vacant lot, which will have to wait for a future post. For now, I'm off to bed.

As soon as I've read these, that is.

List copied from RockFlipping HQ. Check back later; Dave will be posting links for a couple more days.