No boots, no bags, some goodies anyhow

I left my boots in the trunk. That was my first mistake.

We went down to Crescent Beach yesterday afternoon. The tide was low, very low. 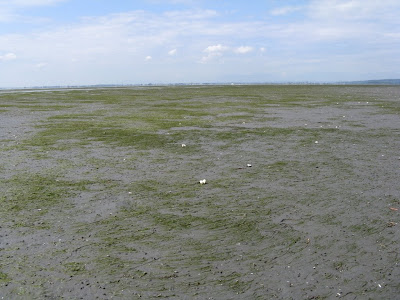 That white spot, at land's end, just under the paired clouds, is a boat close to the beach. And the greenery is eelgrass; this is all intertidal meadowlands.

We walked out towards the distant shore. Laurie collected a few big clam shells. 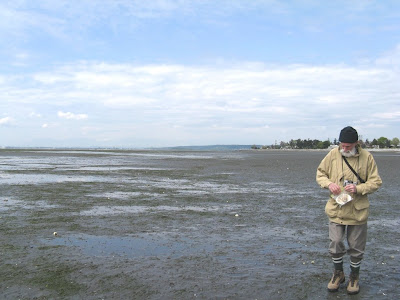 Behind him is the shore we walked from. It was pleasant out there, quiet and warm; the little puddles, when I stooped to wash out a shell or two, were like tepid bath water. We walked for a good while.

Quite a ways out, I noticed a sand dollar, one of the shell-full I posted yesterday. It was about the size of a dime. I showed it to Laurie, and we started looking for more. There were plenty to be found, all tiny. And tinier. The smallest one that made it home (a few of the littlest crumbled when I touched them) is barely a centimeter across.

Here's my second mistake. I had forgotten to bring plastic bags or other containers. Laurie had one sandwich bag, already full. I piled the sand dollars in a clam shell, carried open in my hand.

Then I saw the snails. Not the regular batillaria that are all over the beach; a larger, amorphous shell, mostly covered with sand. (Looking at the photos, I think the sand is glued to the shell.) I wouldn't even have seen them if one hadn't suddenly rolled over. I looked closer, and they were moving, slowly.

I gave Laurie my clam shell of sand dollars to hold, and bent to take photos. And Laurie said, "Hey, the tide's coming in!" I looked, and it was; it was frothing and splashing about half the distance away that it had been when we got sidetracked.

Never mind; I wanted to get those photos. 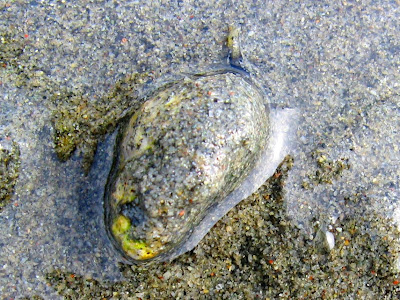 Here's one. It's about an inch long. See the foot, or tentacle sticking out the front?

I took three photos, hurriedly, and looked up. The water had halved the distance again; this is flat land and the tide speeds in. Time to go. Laurie, at least, had decent boots; I was wearing street shoes. Leaky street shoes. I took back my clam shell and ran for the shore.

At the first eelgrass patch, I noticed that the leaves were covered with yellow lumps. I jammed my camera in a pocket, and grabbed a handful. And ran again.

When I got to safe ground, I set my stuff on a rock, piled the dangly eelgrass in another clamshell, and took a photo. This is what I saw: 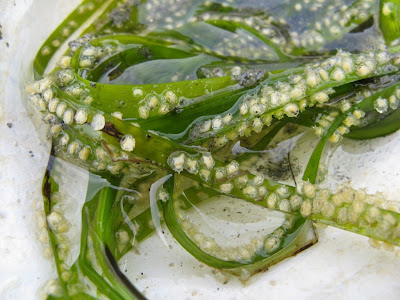 I don't know how much of this there was, nor did I have time to see what creatures were associated with it. I should have been wearing boots; I would have stopped to investigate the surroundings.

I dug through my pockets again and found a pill bottle. I jammed eelgrass and water into it, and dumped the rest in a tidepool. At home, I dumped my catch out onto a plate.

I had more than eelgrass; something was dashing about in the water. These: 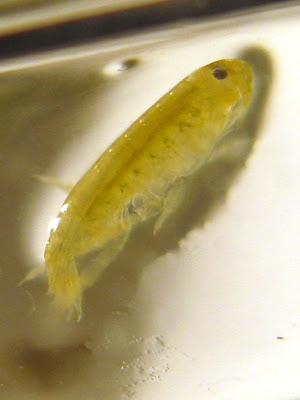 Shrimp of some sort? 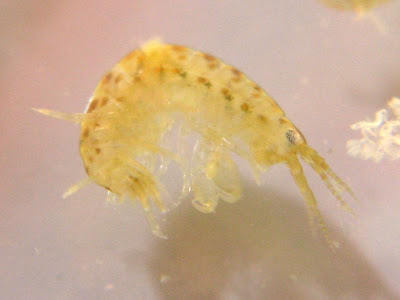 There were two varieties; some were plain, some spotted. See the stripy eye? (This one is dead: the other was very much alive.)

But what about the yellow blobs? Close up, this is what I saw: 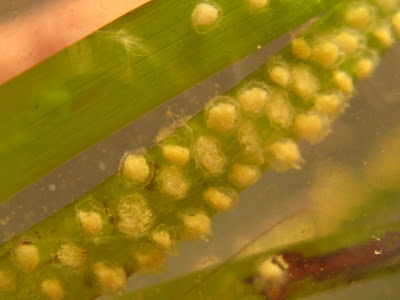 Individual packets of clear jelly, with a central area full of yellow balls. Eggs? Looks like it to me.

I knocked a few off the leaves; they were glued on tightly. They didn't seem to have a root or holdfast. To touch, they felt hard, but jellyish. 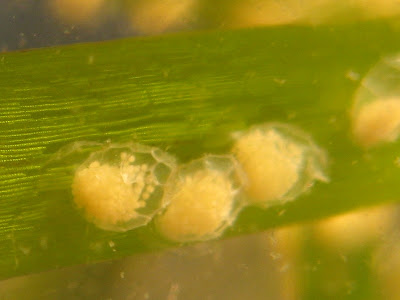 The blobs weren't uniformly round; some were quite spiky. Some lined up in rows, others were spread higgledy-piggledy.

I tried something new; I focussed on one blob with my old hand microscope (at 40x), held it in position, and aimed the camera down the eyepiece. I'm quite pleased with the result: 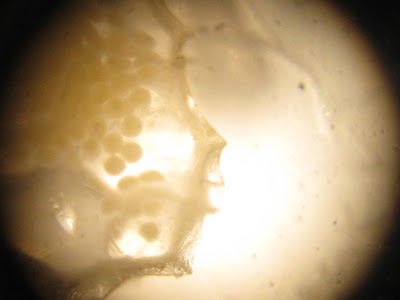 Not much to be seen, though. Some sort of nucleus in those "eggs", that is all. And the irregular outer casing. At 60x, the camera caught only a blur.

I don't know what these are. I looked at photos for a couple of hours and found nothing like them. The closest I can come up with are some sort of sea snail eggs.

What do you think?
.
Posted by Susannah Anderson at 11:35 pm