Looking at an egg again

Last Monday, I posted a photographic challenge, borrowed from an article in WaveLength Magazine; take 36 Photos of an egg.

A few of my readers indicated that they planned to try. So far, one, at Cicero Sings, has posted her photos in the Flickr group I set up for the purpose. (I hope that there will be more, later.) 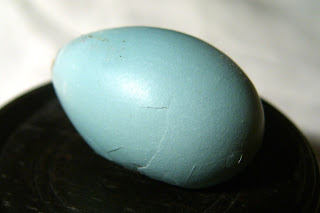 Robin's egg, collected after the chick had flown.
Well, I took my 36 photos, and more, and learned something in the process, enough, maybe for several blog posts.

We each looked at the assignment from our own perspective; however, a couple of shots are remarkably similar; both Cis* and I photographed the freckles of the egg shell with light behind it, both of us showed the eggs in the carton, both broke and cooked the eggs. There the similarities end.

Cis saw the eggs from a warm domestic perspective, cooking, garnishing and serving them. Her photo of a breakfast laid out on the placemat, eggs with a cinnamon roll, water in a glass, coffee, brought back happy memories of Cariboo kitchens, with the coffee fragrant and the conversation relaxed; thanks, Cis!

I am weird, though. And not domestic, at all. Frying an egg was the limit. (And besides, I got hot oil on my lens and had to clean it. Not good.)

I spent some time just looking at the egg. Paying attention. Asking myself questions. And then almost randomly, wandering around to see what seemed to have some association in my mind to the "eggness" of the egg.

One of those associated objects was a bowl of rocks. 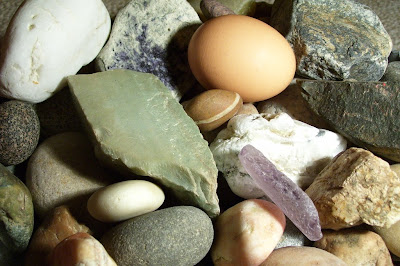 An egg is fragile. One crack on the side of the frying pan, and it breaks wide open. A few pecks from the baby -- how tiny and weak he is! -- from inside, and the shell gives way. We crumble the shell in our hands to spread on the garden to discourage slugs, smush a half-dozen into a handful to throw in the trash.

But an egg is incredibly strong. Grab one just right, and you can squeeze with all your strength without breaking it. Cut two egg shells in half, and you can stack books on them, even sometimes stand on them without crumbling them. (Internet Encyclopedia of Science, para.4)

What makes an egg so sturdy without sacrificing its open-sesame policy for the chicks? The shape. The round sides transmit stress evenly along the walls; it is only when the egg is impacted from a cross-wise direction that it breaks easily. Therefore, we crack the egg against a bowl or the frying pan; the chick pecks at one spot, against the inward curve.

Googling for formulas (how strong is eggshell strong?), I found other fascinating facts:

Did you know (I didn't) that the reason sea-going birds can lay their eggs on narrow rock ledges, without a nice deep nest, is that their eggs have pointy ends?

Murres lay one egg on a bare nesting ledge. Their egg is very pointed. If bumped, the egg is more likely to roll in a tight arc than to roll off the cliff. (Royal Alberta Museum)

I wonder if that applies also to pigeons that lay eggs on building ledges, held in place with only a loose stick or two? Seagulls, cormorants, etc.?

RAM goes on to explain the eggs of those marsh birds with the nests right down on the wet ground:

Shorebirds normally lay four pointed eggs. In the nest, the eggs are oriented with their pointed ends towards the centre. This minimizes the amount of space needed to form the nest and increases the efficiency of the heat transfer from parent to egg during incubation.

Of course, a spherical egg is more economical, conserves heat better, is stronger. But they do roll. Great Horned Owls lay spherical eggs; I think I can assume from this that their nest is deep enough to prevent loss.

So much to learn! What fun!