Doing it the hard way

I've got some more blurry pictures of my backyard birds for you.

But this is blurring with a difference. It demonstrates the different feeding styles of each type of bird.

Here is a chickadee: 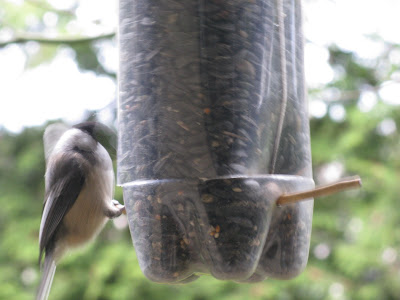 He hangs onto the perch, off to the side with his body in a vertical position, and facing the escape route, then quickly bends his head down to grab a seed, and immediately flies off. 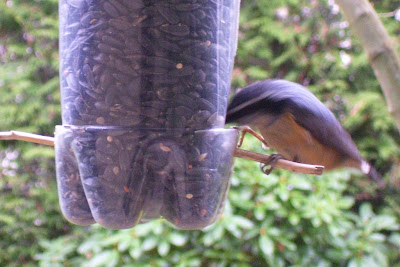 Stands in normal posture on the perch, facing the feeder, then twists his head down sideways. Note the right foot holding the lip of the feeder. 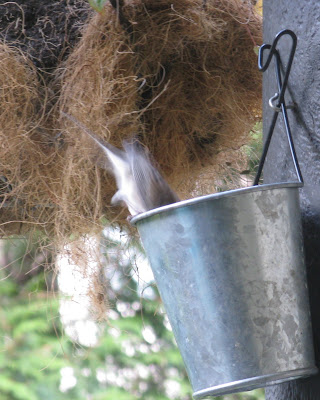 Stands on the lip of the bucket, body horizontal, then quickly upends, like a mallard, to get a seed, which he brings up and eats in a normal position before he flips over again. One I was watching today flaps his wings wildly during this procedure; the one in the photo did not.

And here is a pair of pine siskins from last spring. Watch closely: the one on the right at the start of the video stands quietly, stuffing his face from the open slot. But the one on the left has found a seed stuck off to the side, jammed in a bent end of the cut. He spends the entire time twisting upside down to worry it out, even though he has a dozen easy-to-get seeds at his side.

I'm still trying to get the towhee, doing his chicken scratch routine. And the varied thrush, with his leaf-flipping trick. Wish me luck. And patience.
.
Posted by Susannah Anderson at 1:31 am