... but I found an absolutely beautiful slug on my patio.

I was out in the middle of the night, looking for a maple leaf with aphids to feed to a syrphid fly larva (another story, for later) and almost stepped on this: 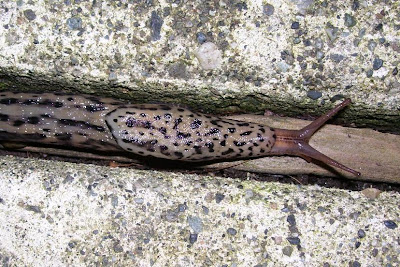 Of course, that's not exactly what I saw; there is a light on at night, but not that bright. I brought out a lamp to get photos.

This is a leopard slug, Limax maximus. I haven't seen one around here for a long time; mostly we get black or dark brown slugs. These are the slugs that perform those incredible mating displays. Which I haven't seen. Yet.

He was moving too fast to get in close up. I sacrificed one of my hosta leaves to slow him down. He stopped and munched at it. 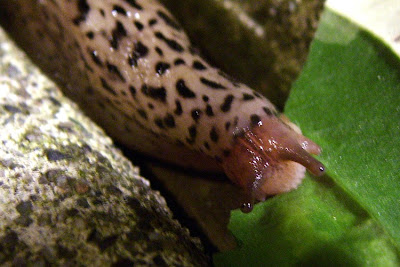 Sorry, it's a blurry photo; the best I could do with an active slug and poor light.

I had never been up close to an eating slug before, and was surprised at how cat-like were his movements. And how his face changed. Normally, the slug just shows the tentacles (4 for these slugs), but when he stopped to eat, he stuck out a whitish jaw and bit or scraped away at the leaf, turning his head from side to side to nibble at different areas.

I was able to get a good look at his outfit, too: 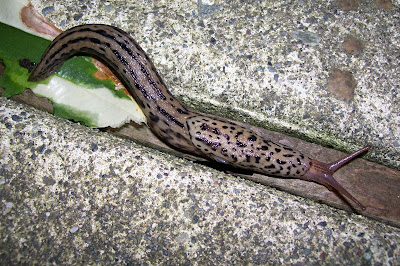 A tidy spotted "waistcoat" with a V cut in the centre back, and striped brown and black sheath behind. Along the upper end of his tail, there was a clear keel, like a transparent fin. His lower parts were creamy white, with a delicate grey fleck. Very elegant.

If you look closely, you can see, halfway down the waistcoat, a whitish spot. That is the pneumostome, his breathing hole. It's a bit clearer in this next photo: 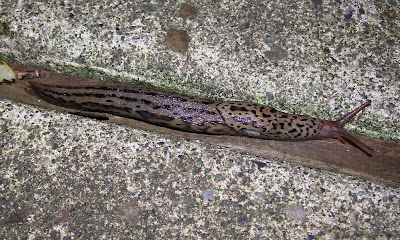 He'd had enough of the hosta; he had other business. He went on, traveling fast. I took away the invasive light and left him to the night.
Posted by Susannah Anderson at 3:07 am