The miniature crab spider that lives on my desk was hungry. She had eaten the last of the Indian meal moths from the bird seed, and I hadn't fed her for almost a week. But bug season is beginning; even in my shady yard, a few small flies are showing up. I went out hunting for something the spider might like.

Under a dead maple leaf, I found a pillbug, far too big. But I gathered a handful of leaves and brought them inside to search for spider goodies. I found a couple of springtails; that would do.

Something ran out from under a leaf. Tiny, like a springtail, but it didn't hop. Whenever I tried to pick it up with my skinny paintbrush, it raced backwards, as fast as it had been running forward.

Under a magnifying glass, it waved big, angular pincers at me, like a crab would. I captured it, finally, in a drop of water, then photographed it with the camera and the microscope. 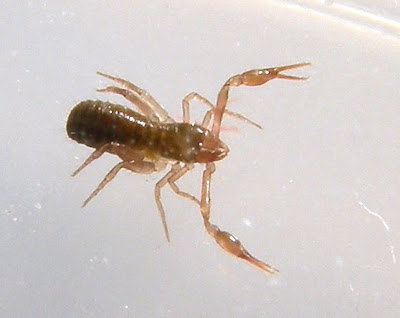 Pseudoscorpion, 1.9 mm long, nose to rear, not counting pincers.
My first thought was "beetle"; some beetles have quite impressive pincers. But it has a waist, and the abdomen is segmented. There are no wings or wing covers. And it has eight legs, which makes it an arachnid, a relative of the spiders.

There are four pages of photos of non-spider arachnids in my insect and spider book. It took only a minute to find a similar family; Chernetidae. And another minute to find Chernetids on BugGuide and retrieve photos of pseudoscorpions. As to which pseudoscorpion, I will have to ask the BugGuide guides. The photo that most closely matches mine was taken in New York, far away. There are at least 26 species, in 7 families, here in Canada, and 3,400 species worldwide. (BugGuide) 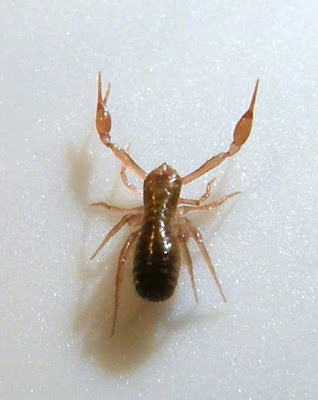 Anytime he saw my shadow, he raised those big pincers high in the air, threatening me. Scary!
The pseudoscorpions are predators, like their kin, spiders, mites and ticks, and the "true" scorpions. The pincers have two parts; a large hand-claw combination, and a movable claw. This claw is venomous. (Not that I would worry; it's too small to penetrate my skin. Most are under 8 mm. or 1/3 inch long, )

They live in many habitats, including leaf litter, where I found mine, preying on small flies, mites, ants, even butterflies and worms, if they're small enough. They also eat carpet beetle larvae, which makes them heroes in my eyes; the larvae got one of my favourite sweaters last winter.

The mouthparts include four sharp points, rather like another large pair of pincers. I can't find any mention of these being poisonous. 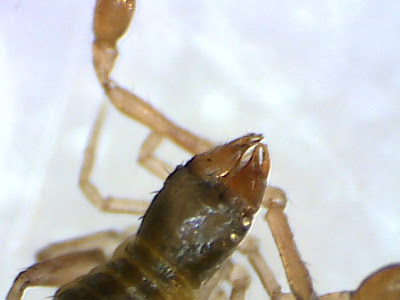 Head of pseudoscorpion, showing the mouth. I am not sure whether I'm seeing eyes or not.
A few interesting facts from Wikipedia:

The abdomen is short and rounded at the rear, rather than extending into a segmented tail and stinger like true scorpions.

They may have two, four or no eyes.

During digestion, pseudoscorpions pour a mildly corrosive fluid over the prey, then ingest the liquefied remains.

Pseudoscorpions spin silk from a gland in their jaws to make disk-shaped cocoons for mating, molting, or waiting out cold weather.

Chelifer cancroides is the species most commonly found in homes, where they are often observed in rooms with dusty books. There the tiny animals (2.5 to 4.5 mm) can find their food like booklice and house dust mites. They enter homes by "riding along" with larger insects (known as phoresy), or are brought in with firewood.

They also ride under beetles elytra, preying on the mites that plague the beetles. Wikipedia has a photo of one riding a small fly.

Steve Taylor (Illinois Natural History Survey) has some great photos of pseudoscorpions of the US.
Posted by Susannah Anderson at 3:18 am