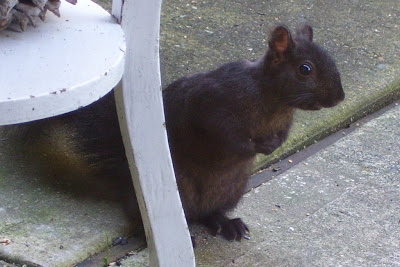 Hi, there!
So Bloglines appears to be down today. There is no message to that effect; it just hasn't updated any of the blogs on my list. It remembers which ones I read, and who I am, and all that; just gives me no updates.

But I must have my fix!

I called up my list and went on down, clicking on each one to bring up the old posts, then on their "home" page for the new ones. Slower going than usual; I abbreviated the process, going only for the "must-reads".

One of the first was Cicero Sings. Where I found she'd awarded me the

"Cis" remarked that she had passed on the award before to Canadian bloggers, and was continuing along the same lines. Which got me noticing how many of my "must-reads" are Canadian.

And now I must pass on this award; it's burning my fingers. So here are my day-makers, Canadians all:

First; a few I've linked to before, sometimes often:

Hugh, at Rock, Paper, Lizard. He's just across the river from me, and we end up comparing notes frequently. (Hey, Hugh, we saw a couple of pairs of red-winged blackbirds today, too!)

Jean at A Mountain Too High.

Botany Photo of the Day, from UBC Botanical Garden. Beautiful, if not exactly daily.

Prairie Preacher. Such enthusiasm! (Even in despair, he's 110% about it.) I liked his joke today.

And a few I check out often, but haven't linked to before:

The Interpreter. Fiction; the square peg in a round world. Funny and heart-warming. When you go there, look at the URL. It defines the personality of the interpreter.

And one final blog; Primordial Blog. Home of "The Sexiest Animal on the Planet" series. He says the post you must read is the one on Porcupines. Warning; this blog may not be to the taste of some.
Posted by Susannah Anderson at 10:49 pm