Detective turns up a blank

It all started when Laurie's favourite potted yew turned brown. We had already lost a couple of small evergreens to borer beetles, so I searched the plant for insect life. In the detritus on top of the soil, I found a small grub, no bigger than a rice grain.

It wasn't a borer beetle, but what was it? I stashed it in a plastic box, photographed it, and went browsing through BugGuide.

The closest thing I could find was the larva of a syrphid fly, an aphid eater. A good bug to have around. But I couldn't really be sure; there were no syrphid larvae with the markings of mine. 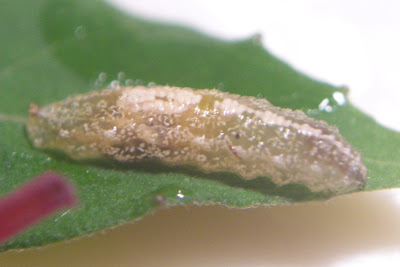 A foggy photo, but it shows the elegant markings on the top and sides. The end towards the tip of the leaf is the head.
To confirm that it was, indeed, an aphid eater, I collected a good handful of assorted leaves from my garden, making sure that I had included several aphids. These went in the box with the grub.

I kept checking, but never saw it eating. 5 days later, I found that it had pupated. 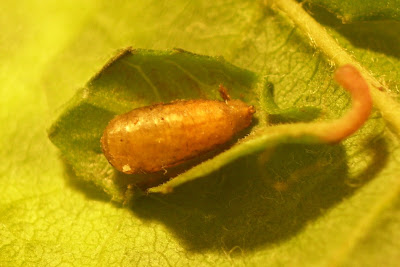 This confirmed, to me, that it was some sort of fly. The pupa has the same two "periscopes" towards the tail that a fruit fly pupa has. I waited and watched.

10 days later, after a day when I had been too busy to check, I opened the box. The fly had hatched, unfortunately at the wrong time. It was barely alive; I gave it air and a droplet of water, to no avail. Within the hour, it was dead.

It looked like a wasp. Skinny abdomen, black with yellow stripes. I labeled my photos "mini wasp". But it was still barely the size of a grain of rice. 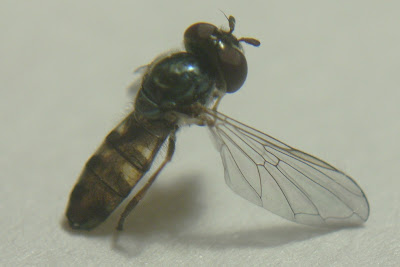 I went on a long detour, searching through all BugGuide's wasps. Nothing like this guy.

I went back to look at their syrphid larvae, and there was a photo of an adult fly; big eyes, a black skinny abdomen with yellow, wasp-like stripes.

So there it is; a hover fly, a syrphid, Platycheirus. And I can tell Laurie that I don't know what's bothering his yew.

Great help I am!
Posted by Susannah Anderson at 2:14 am